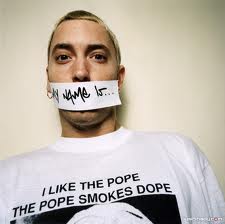 After Will Ferrell told Eminem at MTV’s EMA’s that Afrojack was talking sh*t about him, Eminem responded simply by saying ‘Who’. Sometimes one word is enough in a comeback, but we doubt Eminem doesn’t know who Afrojack is. Afrojack has responded with an Instagram video of him and Snoop Lion mocking Eminem’s classic track ‘My Name Is’.

Afrojack stated on Facebook he had nothing but love for Eminem and Ron Burgundy, so this all seems to be one big joke, unless Eminem responds again. Looking back a few years, who would have ever thought that a DJ could possibly be big enough to even be mentioned by talent like Eminem. #EDMisheretostay

Watch after the jump.

Review: RL Grime at The Music Hall of Williamsburg 10.30

RL Grime kicked off Halloween weekend with a huge performance at The Music Hall of Williamsburg. The crowds came in costume and the room…