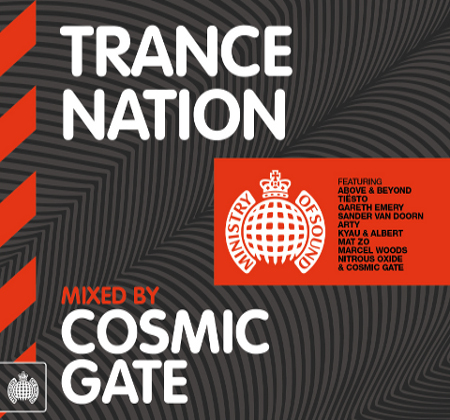 So, you’re not in touch with the trance community?

Your iTunes is dominated with Swedish anthems, wobbly electro, dub step or all of thee above.

Trance Nation mixed by Cosmic Gate might be your starter kit to enter to the exclusive society that is the trance family.

Not just relevant for trance fans, but relevant for any house music lover. It’s difficult to find a good CD (let alone a physical, tangible CD) these days, but Trance Nation is more than good, it’s fantastic. It’s filled to the brim with some of the best and most creative dance music heard in many moons.

Cosmic Gate’s mix is the latest in the legendary series that is Trance Nation. Previous mixers include trance title holders Above & Beyond, Andy Moor and Rank 1.

The genre of trance is a mysterious one. It used to be, either you like it or don’t. Now there’s wiggle room. There is a progressive and electro feel to some tracks. There is festival-qualities to others. Some songs might even sneak into sets of DJs outside the genre.

The trance world’s fearless leader may have abandoned the genre, but to be apart of the trance community now is to be apart apart of the progressive community in 2007. The music is at it’s highest quality, arguably, ever. Far away from the thumping, million beats per minute era casual fans might associate it with.

Trance Nation is a splendid starting point for beginners and a snobby talking point for vets. Some tracks were more relevant during the late fall and early winter, but Cosmic Gate’s selection isn’t with out it’s exclusives.

It isn’t without it’s flaws either. The mixing is not the best in the beginning part of the first CD. It could be chalked up to it being separate tracks on a CD or it could be just a complete difference of how music is mixed compared to progressive sets. It does pick up, especially in the second CD, but the ill-fated blends do stand out.

The track selection is excellent. Some will not have cross-over appeal, but entry into the trance family isn’t made to be easy. You have to earn these drops. After thoroughly listening you might have new respect for some of the deeper trance that Cosmic Gate mixed in. You’ll almost certainty have respect for the landscapes built within each production.

Overall, the album is a success. A house fan who has gone trance-less in his or her journey could take away upward of 10 tracks from this two-disc compilation. A member of the trance family could salute the brick by brick composition Cosmic Gate built up over 28 tracks and nod approval of the latest installment of the legendary series.

Trance might not be all the rage. It might be in the shadows of the Swedish dance music towers, but is relevant and crying to be discovered by new listeners. This is your chance.

Available Feb. 21 via Ministry of Sound.

A really nasty electro song I found from the Gareth Emery Podcast last week. Cold Blank, an electro duo based out in California really…