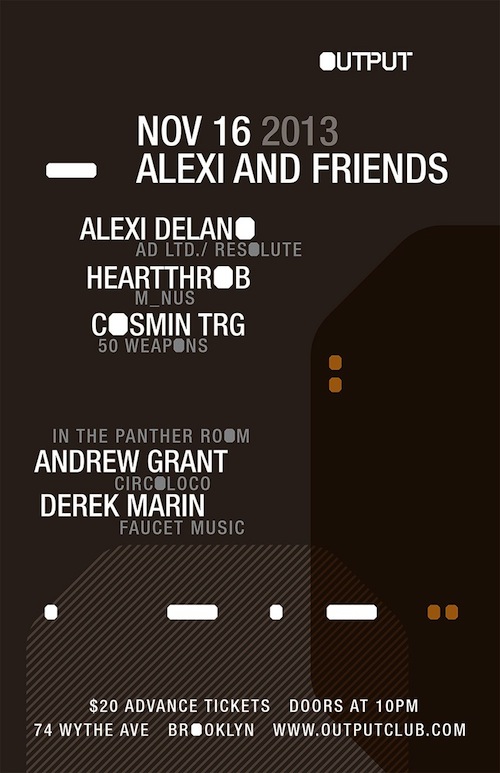 What better way to spend a Saturday night than at one of the hottest clubs in the States? 74 Wythe Avenue is a magical structure in which Output and The Panther Room share walls and a rooftop that overlooks the Manhattan skyline. Lucky for you on November 16th one ticket will grant you access for both rooms and the possibility to see up to five different acts!

Alexi Delano, ‘a man who seems to be made of music’, will be bringing his years of expertise to Brooklyn this Saturday. Delano has released albums on monster labels such as Minus and Drumcode. Michigan native, Jesse Siminski, will be accompanying Alexi Saturday night. Siminski, better known as Heartthrob, is also part of Richie Hawtin‘s Minus family.

Cosmin TRG, Andrew Grant and Derek Marin will also be on the decks Saturday.

Get tickets while you still can and be sure to lace up your dancing shoes!

**Just Announced**
Alexi will be warming up the night with a special opening set, in addition to his closing duties. Make sure to get there early to witness this rare treat!

Summer’s finally here which means boat parties and Governors Island shows every weekend, but if you’re going the traditional route and sticking to the…