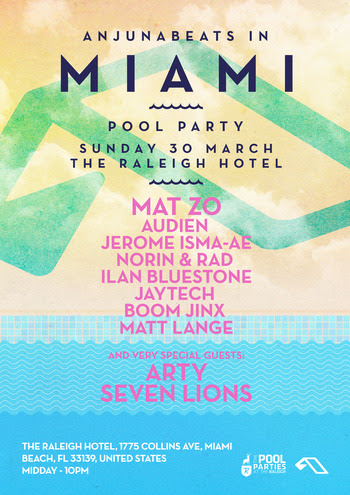 Anjunabeats has announced their lineup for their pool party at the Raleigh Hotel in Miami on Saturday, March 30th. The lineup boasts some of the best Trance artists in the scene, and this will easily be one of the best pool parties of MMW. The party features Mat Zo, Arty, Seven Lions, Audien, Jaytech, and many more.

Each artist had a very successful 2013, especially Mat Zo and Audien. Zo came out with his album ‘Damage Control’ which went number 1 on iTunes Dance and also earned him a spot on Billboard Top New Artist. Audien released two mega tracks ; ‘Wayfarer’ and ‘Iris’, really putting himself on the map in 2013. He is also from CT, and a big favorite of EO’s.

In addition, Anjunadeep is proud to announce their first ever solo Miami party, Anjunadeep in Miami, which will take place on Saturday, March 29 at Cafeina. Performing will be Anjunadeep heavy hitters Beckwith, James Grant, Lancelot, Manik and Matt Lange, along with special guests T. Williams and Kidnap Kid, plus a special guest TBA.

Do not miss either of these events if you are a hardcore Trance fan, because this is some of the finest talent that will be in South Beach. Purchase tickets here.

Friday’s Girls & Boys party at Webster Hall has to be one of the more anticipated iterations of the weekly event in recent memory….