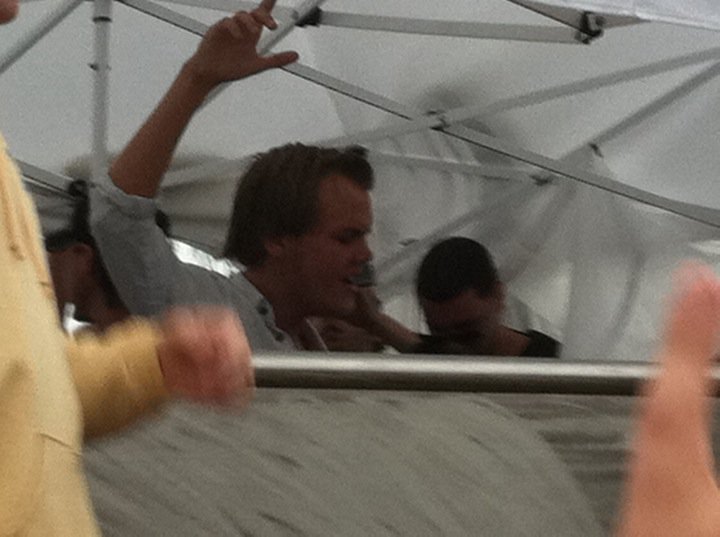 Hope everyone had a great weekend regardless of the awful weather. I have been a resident of Suffolk County for about 15 years and when I heard a few months ago that the one and only,Â Avicii would be performing at the beach I had gone to since I was a young kid, I melted in my seat as I bought my ticket. What could possibly be better than the beach, brews and great tunes by one of the greatest Djs in the world? Absolutely nothing. The only catch about this amazing experience was the awful weather. But hey! Why not make the best of it and rage in the rain? That is exactly what everyone at Neptune Beach Club had in mind. The place was bouncing all day, and when I say bouncing, I mean the deck literally caving in and out from the crowd grooving to great tunes all day. And of course with no surprises, Avicii accomplished the crowd to break the deck when he dropped the infamous mash up of ‘I’m Coming Home’ by Diddy (Dirty South) remix vs ‘Flash’ by Green Velvet (Nicky Romero Edit). When he had built it up with ‘I’m Coming Home’ and as soon as ‘Flash’ dropped…Boom, that deck is officially in a better place now.

Backtracking, the beginning of the day was great, It wasn’t too cold out quite yet and we were all graced by the awesome sounds of Matt Goldman, a new and upcoming DJ who has been opening for fantastic artists such as, Kaskade, Afrojack, Tiesto and of course Avicii! Playing great tech house all day such as Nicky Romero’s ‘Play N Stop,’ and ‘Point’ by Nice7, Â some of my personal favorites. Leading into Avicii’s set, Goldman was dropping bombs to pump the crowd up such as ‘Don’t Ditch’ By Tiesto & Marcel Woods, ‘Diamond Life’ by Louie Vega, Jay ‘Sinister’ Sealee, Julie McKnight (Daddy’s Groove Re-edit) and another personal favorite of mine, ‘Release’ by Third Party. I was very pleased when this dropped because it has been months since I’ve heard any Dj drop this track.

Goldman had the crowd ready to rock by the time Avicii got on stage and everyone was ready to rage, hard. Opening the set with ‘Save The World’ by Swedish House Mafia, The entire crowd was singing along and with no hesitations, Avicii jumped right into an array of bombs, and when I say bombs i mean the deck broke within the first 20 minutes of his set. He had the crowd bumping and dancing all day. After the incredible opening of ‘Save The World’ he jumped into one of my current favorite songs, ‘Personal Jesus’ by Depache Mode (Eric Prydz Remix).

Following the great opening, probably the most memorable part of his set was his back to back mash ups of the ‘We Are Your Friends’ Acapella by Justice vs Henrik B’s ‘Acid Rocker’ following his own, ‘I’m Coming Home’ by Diddy (Dirty South Remix) vs ‘Flash’ by Green Velvet (Nicky Romero Edit). When I was in Miami for UMF, I was perusing Youtube for tracks that Carl Cox had played that night and I came across Avicii dropping a new song by Henrik B, aka ‘Acid Rocker’ at Mansion. All I wanted was to hear Avicii drop it live the next time I saw him and he did at Neptunes, and I thoroughly enjoyed it along with everybody else. He put an amazing spin on it by including the classic ‘We Are Your Friends’ Acapella by Justice, he had the entire place singing along! His, ‘I’m Coming Home In a Flash’ mash up really got the crowd going when the deck broke! After these two tracks, he dropped ‘Pressure’ by Alex Kenji, Starkillers, Nadia Ali (Alesso Remix) and following that was ‘Blow Up’ (Thomas Gold vs Axwell Remix) by Hard Rock Sofa. After Blow up, I think the crowd was warmed up for some Avicii.

This was my fourth time seeing Avicii in 2011 (I know, thats disgusting) but I could say that this was his greatest opening I have ever seen. After his epic introduction he went into his usual Avicii Set with his personal productions such as ‘Levels,’ ‘Swede Dreams’, his ‘Rolling in the Deep’ Remix, ‘My Feelings For You,’ ‘Penguin,’ ‘Blessed,’ ‘Hang with Me’ and many many more. He really had a great set, and it was a lot of fun dancing in the rain minus the good hour of a heavy downpour. I mean, Monsoon status. At this point a lot of the crowd had either run in the indoor section, the bathrooms to save their phones from drowning, or just stayed out and raged in the monsoon. It was a very interesting experience because of the weather but it didn’t stop me or anybody else who was there from having an awesome time. Avicii, kudos for flying out to Long Island and still enjoying playing a great set for all of us on a really shitty day. Thank you for providing us with awesome music, a memory I will never forget.

I wrote down most of the tracklist minus a few because I was terrified to take my brand new iphone out of my pocket and ruin it. But this is about 90% of what he played so enjoy and happy listening! :)

Released today on Ultra Records, Chris Lake’s ‘Sundown’ first premiered on Pete Tong’s Radio One back in late July and has been a highlighted…