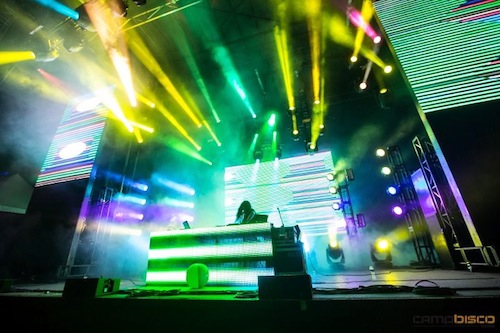 Since the first Camp Bisco in 1999 (which had approximately 800 attendants and 16 artists), the event run by MCP and The Disco Biscuits has really grown and has been more and more epic with each passing year. This year’s edition, which had 20,000+ attendants and over 100 artists, literally outshone all previous years and part of it is all thanks to the lighting team including one of the head lighting designers (as well as Bassnectar‘s lighting designer), Michael Smalley. For the past five years, Michael has been helping out here and there with lighting at Camp. This year, he was responsible for designing the rigs, lighting, and video in the B.I.G. tent and the Main Stage B. The B.I.G. tent was operated ALL weekend (that’s at least 14+ hours a day for three days straight) by Kyle Kegan (Michael’s ‘protege’), and Sylvia Dowling (VJ Slim) & Miles Kondylasp (DJ Epicenter) who are co-owners of the Alanta-based lighting production company CLVR ATL and have worked with Camp Bisco for the past two years. We caught up with Michael, Sylvia, and Miles after Bisco to check out what exactly goes into creating the atmosphere for such a large scale event, their work in the B.I.G. tent, and upcoming projects.

Read the interview after the jump!!

Describe your responsibilities concerning the lights at Camp Bisco so our readers can understand a little more about what you do. How long have you been working with Camp Bisco? How did you start with them?

Michael Smalley: Over the years my involvement with the Lighting and Video design for Camp Bisco has evolved from building and running the light rig in their first Dance Tent 5 years ago to having a helping hand, even sometimes in a small part, with each of the stages at Bisco this year. Predominately I designed the Rigs, Lighting and Video, for the “BIG” tent as well as the Main Stage “B”. This is the second year that I’ve done this for Camp and this year was a real step up in what was possible thanks in Great deal to the guys at Meatcamp who decided to go with the larger format tent, which really allowed us to go Big. The big change for me this year was that I wasn’t actually at Camp Bisco during the festival until around 5pm on Saturday night. I went in early in the week and supervised the build and worked on the programming with my operators for each stage. Then flew out Thursday morning to do a Bassnectar show in Kentucky.

CLVR ATL: Our first Camp Bisco was in 2011, where we ran live visuals in the Grooveshark Tent. We got that gig via Bryan Terwilliger, a friend in Atlanta who works with MCP. At Camp Bisco 11, we were responsible for: helping the LED wall vendor tech the video system, helping any musical act’s VJ tie into the LED wall, taking any musical acts custom video content and put that in the live feed in a tasteful manor.

How much work and planning goes into creating the atmosphere in each tent? Do you create different lighting set ups for each individual artist?

MS: It takes a pretty solid amount of time from start to finished product. The process of getting any rig from idea to physical concert monster is pretty wild. It usually starts with me getting together my ideas and going to meet up with my good buddy Andy Cass, Andy programmed and operated the Disco Bisco sets at Camp Bisco this year. Andy is absolutely amazing on the CAD, Computer Aided Design, program we use. He is able to build the rig in a virtual 3D environment that really allows us to design knowing the constraints of the venues or stages we will be putting this rig into. Once we get a functioning idea going in the computer I will irritatingly force Andy to switch things around and adjust things over and over again until I think its looking good. Along the way Andy tends to interject a slew of helpful thoughts and ideas, usually based off his knowledge of what I like and don’t like and other artistic ideas he knows we both like. Its a team effort in a serious way, especially at this point. Once we have high-fived each other, at least 10 times, we can be pretty confident that we’ve got a winner. Then…..You cross your Fingers…. Grit your teeth… and with your set of uncrossed fingers you press send on an email to the client………Wait……Wait…..and….Wait. In a perfect world they send you a virtual high five and the Go ahead to start the bidding. If your really lucky your amazing Production Manager will do this part for you. The bidding process can make you go insane, but hopefully you get the rig pretty close to budget without losing too many fixtures or making too many fundamental changes to the original idea. I’ve been really lucking in this aspect.
After you get the rig locked and loaded with the money men, you begin a pretty technical process of getting all the technical plans and engineering type info together, This is a multiple and pretty boring task but its really important so you don’t waste time once you have a captive audience of local hands just waiting to get their hands dirty. So we take this process seriously and strive to get our ducks in a line long before its too late. Once we get all the boring stuff out of the way we move onto the Artistic stuff. Andy is a champion and often builds me a virtual model of the lighting rig so that I can work from home. This can take a long time working strange hours and often happens between the rest of the work going on in my life over the coarse of a few months. If Andy and I work hard before we get to site we have more time to really craft and tweak the rig once its been built, and thats really when the magic happens.

CA: I would say a TON of planning goes into the stage design, lighting design, sound system, the video- even the structure itself is measured and set up by certified riggers and engineers. Hours of meetings and hard labor go into each area! The lights were controlled by Kyle Kegan, but any artist that has their own VJ and custom content we help tie them in during set breaks.

This year’s B.I.G. tent was notably more hooked up than either of last year’s tents. Did you have anything to do with that? And can we expect even more lights at next year’s Camp Bisco?

MS: Meatcamp did the fans and their selves a favor going with the bigger tent this year. It meant we had more room, a higher ceiling, and more weight capacities for the roof structure. The end result was we could get really creative with it. I like to think of Camp as a yearly marker of where I’m at in my professional and creative progression, often the rigs are a combined mesh of many ideas I’ve been playing with since the last bisco. I think we can definitely expect something exciting next year as we inevitably continue to grow and progress.

CA: We were even surprised at how big the LED wall was when we received the stage plots!!! We are simply operators of a stage design dreamt up by none other than Michael Smalley- as far as next year is concerned, I guess we’ll all have to wait and see!

Michael, let’s move onto your work with Bassnectar. How long have you been working with Lorin and how did that come about?

MS: I’ve worked on and off with him for the last 4 years. But have been full time with him for 3 years now. The music industry is a serious networking situation, but long story short Andy Cass, who was Lorin’s first real LD, told Lorin to holler at me when Andy left to go work for the Disco Biscuits as a Bass and Keyboard tech. It didn’t take hold right away but eventually I started working with him full time and the rest is history.

Where do you get your inspiration for the projections? I noticed some of them are computer-generated and other parts are edited film…

MS: The video content is very much not all my doing, we have a lot of contributors and folks that help create that stuff, on our last tour Andy was really pumping out some great content for specific songs, most notably the My Machine video we debuted at Red Rocks. He’s really good at focusing on that stuff and getting it done quickly. I have a lot more to do with how the content is arranged and manipulated on the various screens and I work closely with Lorin to decide what videos play to what songs and so forth. Its a really diverse part of the show and definitely the part that changes and morphs throughout the progression of the Bassnectar show.

You’re an incredibly busy man. I feel like you guys have been non-stop touring since March. How did you even fit designing the lighting for Camp Bisco into your schedule?

MS: The key is getting it done really early. Andy and I had our designs for the stages at Bisco in way in advance. Then the rest of the work is broken up over the coarse of a month or two. Also I can trust that our operators, most notably Kyle Kegan, will do an incredible job cleaning up the programming and turning the creations into their own. Its a team effort every time. Its rewarding to guide a ship of awesome designers and programmers to the end goal of a beautiful looking concert.

Can we expect to see your work this Fall at MCP’s inaugural Counterpoint Festival?

MS: I’m hoping so. I’m definitely going to be there with Bassnectar!!

CA: We have many, many projects that we are working on right now, lots of planning for next year is already in place. We can’t speak on any guarantees for Counterpoint, but always wish MCP the best with any event they put on!!

Check out Deadmau5 throwing down the dubstep at Rock en Seine festival in Paris last night. Apparently he has been experimenting with some dubstep…