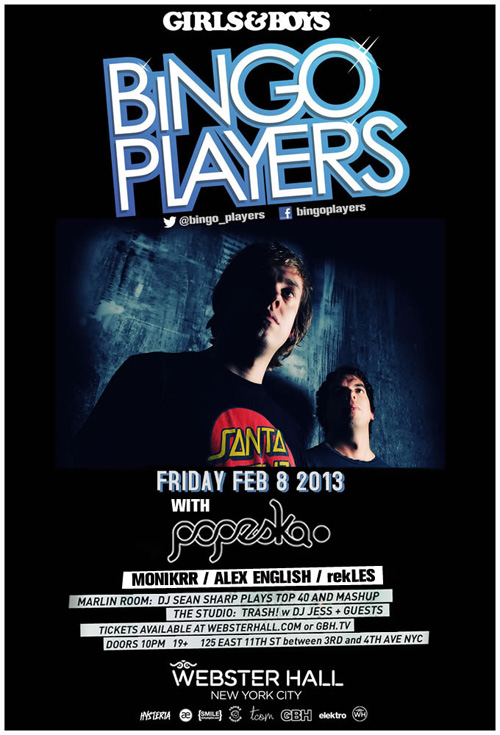 It seems like the Dutch have taken over electronic music, doesn’t it? Tiesto, Armin, Ferry…Afrojack, Chuckie, Sidney Samson…catch my drift? No? Hardwell, R3hab, Quintino, ok you get the point. What started off as a nation dedicated to trance, it slowly made electro-house its leading export. Bingo Players have been one of the biggest, well, players in bringing the nation’s unique music style to the forefront.

2012 was a big year for them; “L’amour” brought their popularity to new heights, and “Cry(Just A Little)” was reworked and released by Flo Rida on his album Wild Ones. “Don’t Blame The Party” and “Out Of My Mind” were huge bangers that capped an already huge 2012. And as I’m sure you can imagine, they’ve been in high demand touring around the world. 2013 is going to be another big year for Bingo Players, so i’m sure they’ll want to set the tone early when they stop by New York City this Friday at Webster Hall. Girls & Boys parties are always a good time, so get your tickets here, and we’ll see you there.
Bingo playersWebster Hall

Playlists For A Saturday Night

Here at Electronica Oasis, we know how crucial music is for a pregame, so we have taken the time to organize all of our…