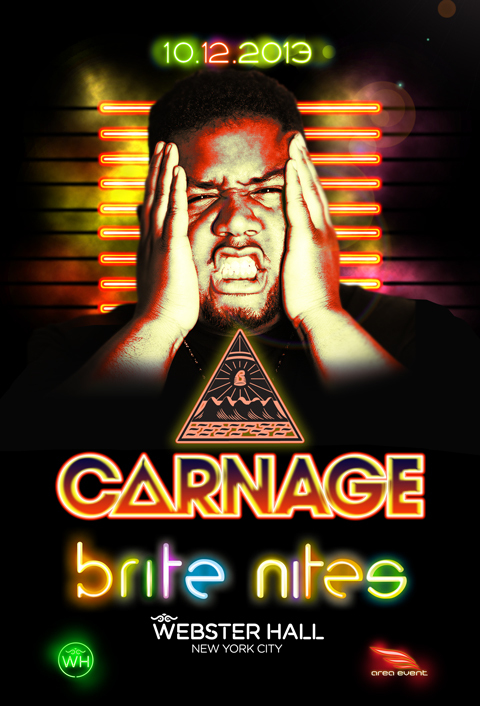 This fall is shaping up to be one of the best at Webster Hall. With big-name artists booked such as Martin Solveig and Adventure Club, Webster has some of the biggest names in electronic music coming week after week. brite nites, which is Webster Hall’s rebranded Saturday event, seems to improve every week. We never know who or what genre to except and are kept on our toes with every announcement.

brite nites will bring another amazing artist to NYC on October 12th when Carnage takes the decks. After the cancellation of the last day of Electric Zoo where Carnage was expected to bring the madness to Randall’s Island, he was spotted at many NYC after-parties where he promised he would be back for redemption soon. Carnage has been sweeping the electronic music scene, selling out show after show and bringing some of the biggest crowds to his stage at every festival. He broke into the scene with some amazing trap, but this bigger-than-life guy succeeds in anything he puts his mind to and can dominate any genre he wants. At Webster Hall on October 12th, expect to hear a plethora of styles and genres and be prepared to have the time of your life. Carnage never disappoints with the massive house party feel he brings to all his shows. This is a night you don’t want to miss.

You may remember the French duo WEKEED from their hyper-compelling original ‘Wild Child,’ and now the two are back at work, putting out an…