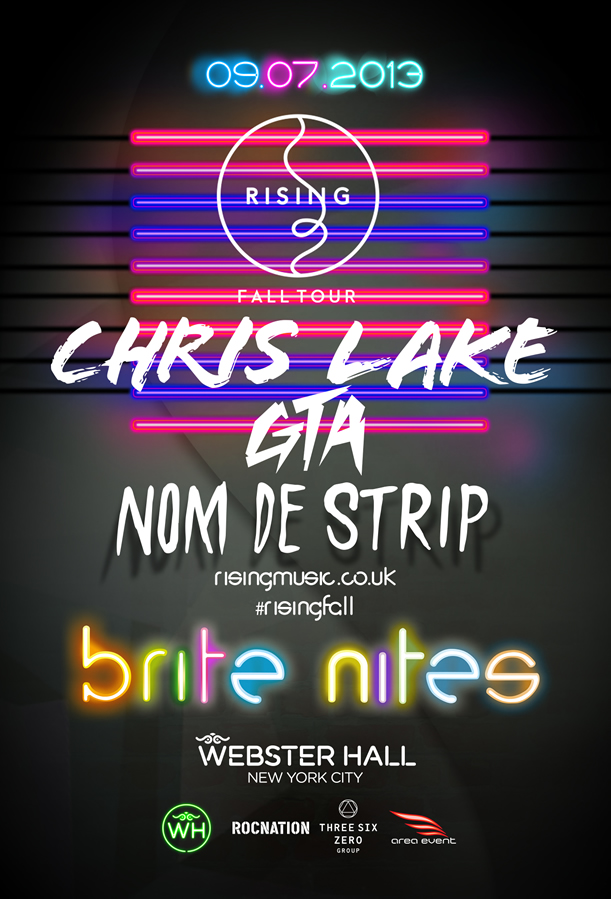 brite nites, Webster Hall’s new Saturday night party, is beginning to develop a reputation as one of the best weekly parties in New York City. It combines music, dance and show to provide New York City with a night they will never forget, every time. In reality, brite nites is more of a production than it is a party. The lights are extravagant, and move perfectly with the beats. The DJs are always the best in the business, and mix only the best music. And the dancers are all top of the line performers, whether they’re dancing with fire, or hanging from the ceiling. Week in, and week out Webster Hall fills its main ballroom with tons of party goers looking to take their stress from the work week out on the dance floor, and the promoters do it with relative ease. Then, every once in awhile a tour comes along that is just too good to be true.

The Rising Fall Tour is one of those tours that has a flier stacked with artists. Featuring Chris Lake, GTA and Nom De Strip, the three artists set to perform are all highly talented acts who have earned the respect they are given. Chris Lake, formerly on Mau5trap, is an electro and house producer/DJ. His most recent single “Oh Shhh” is one of the biggest songs of 2013, and was one of most commonly played songs of the festival season. GTA has a style that compliments Chris Lake very well. It has a grungy feel to it that translates very well over extremely loud speakers. Nom De Strip completes the triangle by bringing one of the most unique and gritty sounds in the electronic music industry. Their hit “Techno Saturday” is another track that would be in the running for the song of 2013, and their remix of Style Of Eye and Tom Staar’s “Afterdark” was a great follow up that proves his abilities.

This night is going to be epic, and one of brite nites’ best parties of the year. You can get your tickets here, and remember it is 19+ enter, and 21+ to drink. Lastly, DRESS BRITE!

Axwell, one of the Swedish House Mafia members, has been added to the Electric Zoo lineup!! Known for hit remixes ‘Temper Trap – Sweet…