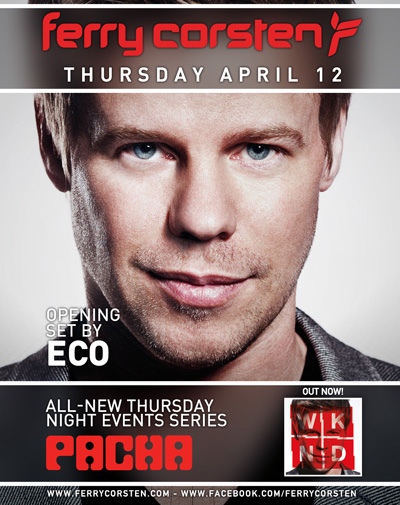 In what is just another symbol of the rapid takeover of electronic music in NYC, Pacha initiated its first Thursday event last week with Sean Tyas & Simon Patterson on the decks and this week brings an A-team line-up of Ferry Corsten and Eco. In conjunction with Massive Event, Pacha will now have a steady Thursday party going to provide another amazing outlet for your dancing needs.

Now EO has teamed up with the folks over at Massive to offer an exclusive ticket giveaway for one of our lucky fans (plus a guest).

Ferry will also be spinning live for 8 hours today on SiriusXM Electric Area Channel 52 to celebrate ‘Corsten’s Countdown 250.’ Ferry will be taking requests on his Facebook page and via Twitter with the hashtag #CC250. Get involved and listen in on Ferry’s live countdown website!

Get Heard With Indaba Music (Contest #12)

Producers, we are back again with another installment of our original mix competition held with Indaba Music! If you’re not familiar with our Indaba…