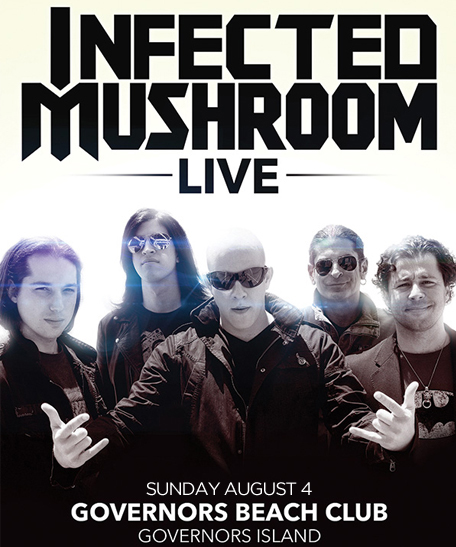 This Sunday, Governor’s Beach Club rolls out it’s sandy carpet for Israeli psytrance duo, Infected Mushroom. Initially scheduled for July 13th, Erez Eisen and Amit Duvdevani of Infected will be joined by their full band to put on a mind-blowing live performance layered with drums, guitars, synths and vocals. Electronica Oasis has teamed up with RPM to offer you the chance to win free VIP tickets (more info below)!

Pioneer’s of the genre, Infected’s addictive undulations attract crowds of many cultures, reinforcing the universality of music and it’s capacity to draw people together. After venturing to Brooklyn to catch Infected’s DJ set at Brooklyn Bowl this past January, I am highly anticipating the duo’s ability to thrust the Beach Club’s crowd into a whirlwind of experimental sound, stimulating visuals and uncontrollable foot work.

Infected Mushroom released their most recent studio album, Army of Mushrooms, under Steve Aoki’s Dim Mak label in 2012; the album remains true to the band’s unique, trippy roots while also showcasing the duo’s ability to dabble with sounds reminiscent of electro and dub step. They continue to push the boundaries of their sound with their two volume EP, Friends on Mushrooms, released earlier this year. However, if you truly want to prepare yourself for the psychedelic experience Sunday will bring, I suggest you check out “Becoming Insane,” which was released on their album Vicious Delicious in 2007. The track ingeniously collaborates passionate vocals and familiar trance undertones, while also incorporating middle-eastern twang and a powerful guitar rift that will leave you yearning to venture to Governor’s to hear such sounds thundering through the night.

Best of all you can enter to win a pair of VIP tickets for you and a friend. All you need to do is enter the contest (after the jump)!! If you’re not feeling lucky make sure you get tickets now (Purchase)