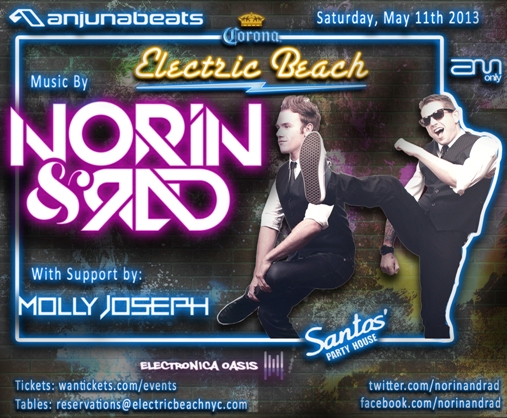 Norin & Rad is a name you better get used to hearing. Tipped as stars of the future by Above & Beyond back in 2011, Bruce Karlsson and Nick Sember have lived up to that billing and more. Since their breakthrough smash “Bloom”, the Californian upstarts have been producing the most futuristic trance-influenced grooves and progressive EDM around with a string of Anjunabeats anthems such as “Zion”, “DeVas”, “Pistol Whip” and “Five Finger Death Punch”.

Always standing out from the crowd, Norin & Rad’s sound is a melting pot of influences that is entirely their own. Influenced by all forms of EDM and beyond, their current production output varies from the anthemic rush of “Aldo” to the rave-influenced progressive house riot that is “Bird Is The Word” through to forthcoming glitch-hop bomb “Rectify”.

As full of energy as their music, the duo’s unique approach behind the decks and fast-cutting DJ style has earned them rightful reputations as party starters of the highest order. In the last 12 months alone, these two Southern Californian boys have played some of Australia’s biggest arenas with Above & Beyond, as well as rocking everywhere from New York’s legendary Roseland Ballroom to India’s Jayamahal Palace. On the festival circuit, they have already conquered the stages of Miam’s Ultra, EDC Las Vegas, Electric Zoo in New York and Tomorrowland in Belgium. This summer will bring a highly anticipated appearance at Creamfields UK, a show at Amnesia for Cream Ibiza and a full European tour.

Lucky for you can enter to win a chance for you and 5 friends to have a table and bottle at Saturday’s show. The lucky winner will be announced Friday afternoon. So honestly, what are you waiting for?? All you have to do is follow @ElectronicOasis on Twitter and fill out this form: Click Here. If you not feeling lucky buy tickets in advance because you don’t want to miss out on this one! Buy Tickets here

Eric Prydz is the best in the biz, period. For all who do not know, Eric Prydz produces under the names Pryda and Cirez…