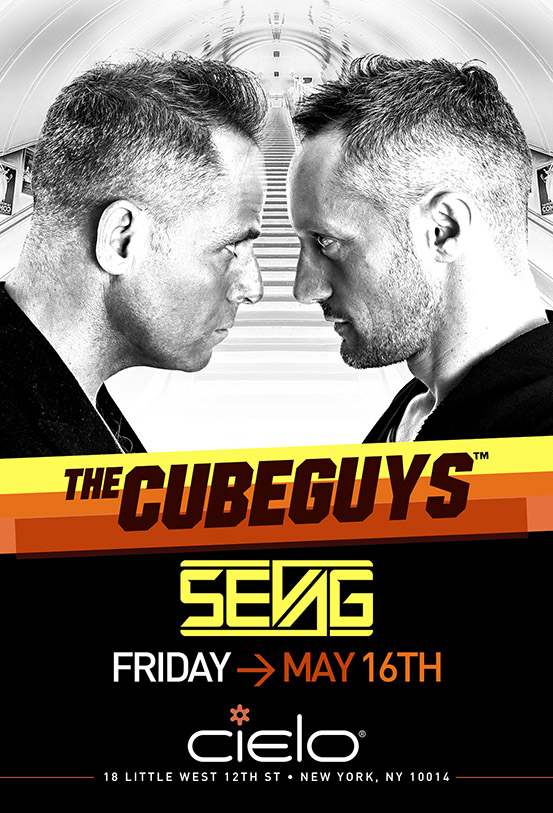 On Friday, May 16th, The Cube Guys and Sevag will be taking over arguably one of New York City’s best sounds systems @ Cielo. The Cube Guys were mainly underground until recently when they have been getting massive support from Steve Angello , also doing a guest mix for the legendary Tiesto. Their track La ‘Vérité’ , released back in March has gotten love from BBC Radio 1 , Steve Angello, Tiesto, Nicky Romero, Nervo and many more. They blend a deep house sound with Progressive melodies as their style and we love it.

The Italian duo will be getting support from Tri-State producer Sevag, who has a big May coming up. He is closing out the Season at Mister East this Saturday , playing Cielo and also HQ Nightclub . Things keep looking up for the NJ kid, and his ‘Happy’ remix has gotten support from the likes of Nicky Romero, Henrix, Marcus Schossow, Promise Land, Matisse & Sadko, Moska (Electronic Producer), Mikael Weermets, Ken Loi, Abel Ramos, Eva Shaw and more!

We will be giving away 2 VIP tickets to the event, and all you have to do is enter below.

If you aren’t feeling lucky, you can purchase tickets here.

2011 turned into quite a year for Alesso. He was really able to put himself on the map with his remix of ‘Pressure‘ by…