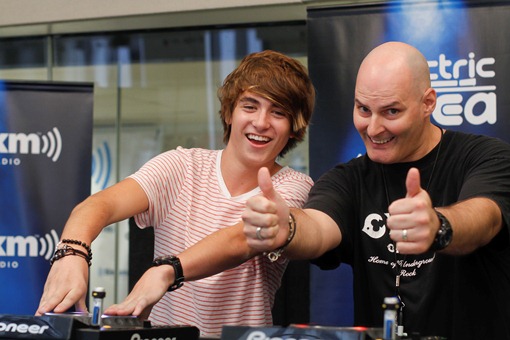 Young Danny Avila spun his way like a whirlwind through NYC last week, marking his first trip to the Big Apple with style with a first gig in honor of Fashion Week. In the city that never sleeps, it’s still easy to blink an eye and miss any number of events and talented artists in an information blitz. But there was no way to ignore the fact that Danny Avila came to town – from professed tech heads to progressive house gurus his name was on the tip of everyone’s tongue as a result of his larger than life presence.

Danny kicked off the week last Wednesday at the Stone Rose Lounge in Columbus Circle, the official lounge of Mercedes-Benz Fashion Week. All things considered, the glittering spot boasting panoramic views of Central Park is not the typical venue associated with house music, but the industry came to see Danny get behind the decks for the first time in NYC. He didn’t disappoint displaying charisma and deft during his two hour set, rife with electro house favorites. Not a bad warm up for his opening set for Kaskade at Lavo the next evening.

Friday afternoon Danny visited SiriusXM in midtown to celebrate being not only the newest but the youngest resident on SiriusXM Electric Area. Not bad for a kid who isn’t even of university age yet. He played to a crowd of fans in the studio’s signature fishbowl studio for his ‘Ready To Jump’ show. If you missed it, his set will be rebroadcast today at 4:00 PM as a special edition of his weekly show on SiriusXMâ€™s Electric Area.

Next off, Danny closed down the house at Pacha NYC, opening with a Alesso – Raise Your Head versus Quintino – Epic bootleg that made the crowd go nuts. As at his previous gigs, Danny looked like he belonged in the booth – even one as famed as Pacha’s. Perhaps his rep as the Justin Bieber of EDM befits him, with his stance that of a natural performer despite his age.

After seeing Danny live up to the hype, we are eagerly awaiting the release of his debut single â€˜Breaking Your Fall.’ Rumor has it his production is awesome, which is unsurprising given his position as a Fedde le Grand protÃ©gÃ©.

After a #18 Beatport Top 100 release, and announcements of forthcoming releases on Armada Music and Infrasonic Recordings, Hyperbits is giving away their genre-defying…