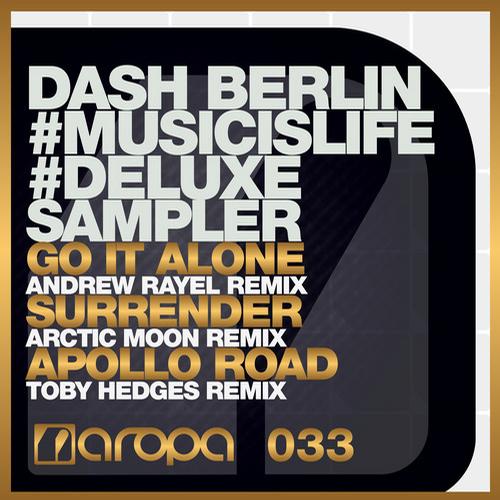 Earlier this Summer, Dash Berlin fans fell in love with the DJ group all over again with the release of the #MusicIsLife #Deluxe 2-disc compilation. The first CD includes two new exclusive originals in addition to the initial #MusicIsLife album; the second CD showcases Dash-Ups and remixes by names such as Ferry Corsten, W&W, Protoculture and Shogun.

In order to give fans a taste of what #MusicIsLife #Deluxe has to offer, Dash Berlin presents us with #MusicIsLife #Deluxe- Sampler 01. This sampler plucks three remixed tracks off of #Deluxe to illuminate the masterful work of Andrew Rayel, Arctic Moon and Toby Hedges.

Time and time again, Andrew Rayel reaffirms why he is one of the most sought after remixers; his extraordinary remix of ‘Clarity’ and striking ‘Lethal Silence’ mash-up are only two examples of Andrew Rayel’s incredible ability to launch a track to new heights. Andrew Rayel reworks Dash Berlin’s ‘Go It Alone’ to deliver his signature euphoric chords and build-ups for another successful remix of a well-loved track. Andrew Rayel + Dash Berlin + Sarah Howells = Heaven, easily.

Featured on ASOT 600 Den Bosch’s ‘Who’s Afraid of 138’ stage this past April, Arctic Moon’s influence in the Trance scene becomes more and more transparent with each release. With his remix of Dash Berlin’s ‘Surrender,’ Arctic Moon opens with the slow tempo chorus of the original mix before breaking into the fast trance beats for which he is known. Arctic Moon slows us down once more to showcase the operatic vocals of Shanokee, but quickly jolts us back up to the pounding base line for a strong finish.

Up and coming UK producer/DJ, Toby Hedges, gives Dash Berlin and ATB’s ‘Apollo Road‘ a completely new face with his remix of the track. Toby Hedges extracts the song’s original piano rift and gently layers it underneath fresh sounds and an amplified bass line in such a way that, at first listen, it could easily be mistaken for a completely new track.

Just over two weeks ago on Friday, August 23rd we decided to cover an event that was a little, let’s say, out of the…