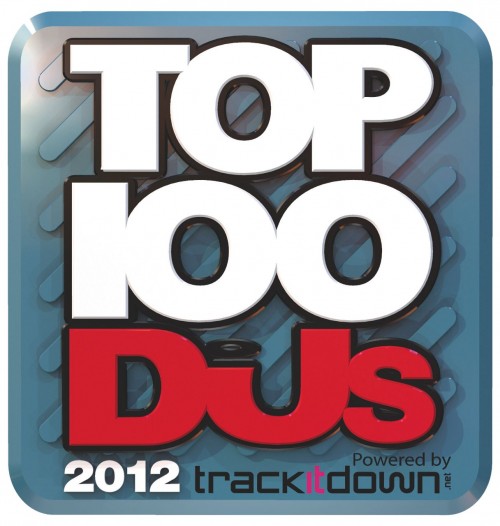 Earlier this week, when this year’s DJ Mag Top 100 rankings were released, I have to say I was pretty excited.

Not because I was curious to see the rankings of 2012’s explosive newcomers like Hardwell and Skrillex, not to know whether the initial leaked rankings matched up to the real ones, and no, not to find out if Armin Van Buuren surpassed David Guetta to regain his title as the world’s number one DJ.

I was excited for the reaction that would follow, to have artists, fans, writers, critics, everyone that plays a part within the electronic music ecosystem, give perspective on the same issue.

Dance music’s world of information is a fragmented one. Lady Gaga‘s manager was once quoted as saying “Within three clicks, you can find out everything you need to know about pop. But electronic music is not well curated.” In any given day, there are hundreds of track releases, previews, and news stories from a massive range of artists, genres, and labels. Keeping up with everything through blogs, social media, and the like, there is so much happening at once that the web can be downright chaos.

But for landmarks on the calendar, like the weeks following Ultra Music Festival, EDC, Electric Zoo, and more recently even the Grammy Awards, everyone has something to say. What people write in reaction is sometimes even more interesting than the story itself.

Take an unexpected milestone in 2012 – the “we all hit play” controversy. Deadmau5‘s rant was one thing, but the reactions that followed in interviews, Twitter, even as far as A-Trak‘s piece in The Huffington Post, gave multiple unique perspectives on one issue. Dialogue is a good thing, and the DJ Mag Top 100 sure sparks a whole lot of it.

Let’s be clear – the Top 100 is far from an efficient way to rank artists. The amount of categories for which you could rank DJs is astounding, from technical skill to live performance to album sales to Facebook fans, yet the Top 100 only captures subjective clicks of a mouse from across the Internet. Even the former News & Web Editor of DJ Mag, Terry Church, claimed the ranking is not only plagued by faulty marketing practices, it is prone to manipulation – something we saw when EDMSnob leaked suspect behaviour from Ferry Corsten, Paul Van Dyk, and Aly & Fila. If that’s not enough, check out 2011’s DJ Mag party. Guetta getting booed was worth a chuckle, but in all seriousness how poorly was this event organized?

httpv://www.youtube.com/watch?v=CZN6VaYd3PY
The only real fact-based ranking we’ve seen comes from another big talking point in 2012 – the Forbes’ 10-highest paid DJs list. But I think we can all agree even the most neon-clad of dance rookies can agree that Pauly D doesn’t place in the Top 10 anything in the world of electronic dance music.

At the end of the day, it’s really nothing more than a marketing tool. Let’s accept that.

But watching how the industry uses this tool is pretty amazing to watch. Nicky RomeroÂ made it loud and clear where he ranks as the highest newcomer to the field: 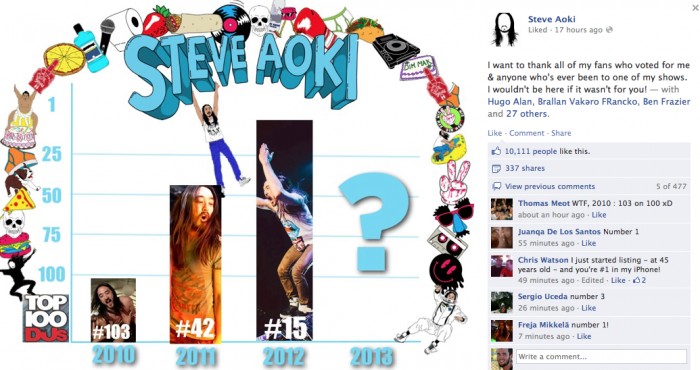 On the other end of the spectrum, Avicii said a polite thank you, while pointing out that he did not campaign. I guess it’s hard to talk down a ranking system that puts you at #3. Still, the “saying what we’re all thinking” award goes to Kaskade, who took to his blog to explain the irrelevance of the Top 100 for him, citing the importance of fans supporting the music rather than supporting a mouse click. Through Twitter it seems many other artists had the same sentiments: 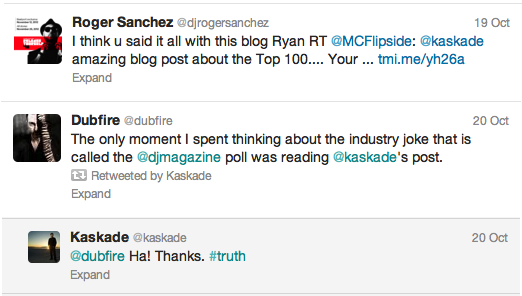 This separation is an interesting one. As a general trend it seemed that artists that appeal to a more mainstream crowd were the ones who pushed the voting the hardest. With the main stage sound becoming increasingly predictable, producers are looking to tools outside of just their music, especially as a qualifier of credibility for fans new to the scene. Whether you think it makes a difference or not, it’s become a big marketing push for a lot of guys (and girls – Nervo made news as the only female ranking) on that list.

Rant all you want, the DJ Mag Top 100 is not going away. It attracts too much attention to the publication and is a big marketing tool for certain artists. Next year, rather than wondering why your favourite DJ wasn’t as high as you expected or complaining about the lack of talent ranked ahead, watch the commentary in the week following. Watch who makes a big deal of it, and who shrugs it off and who just lets the music do the talking. Dialogue on one issue in a fragmented world of information is healthy.

I hope you’re as excited as I am for next year.

Week in and week out these dangerously talented producing beasts bring us the cream of the crop. Swanky Tunes have already created a distinct…