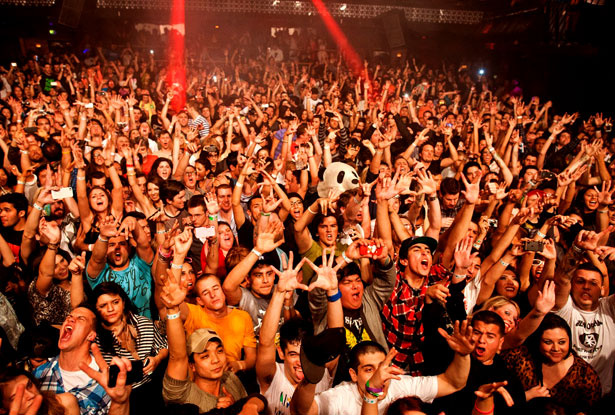 Electronic Dance music. Go back 10 years and ask people in high school and college if they listened to it, 85% would say no. Go to a college party or club now, you’re hearing nothing other than dance music. Why has EDM evolved so much? What are the contributing factors? Is it fueled by the discovery of the drug ‘Molly’ by a younger generation, or are people realizing how beautiful dance music is and the way it brings all different types of people together? Growing up you used to want to be a rock star or professional athlete, now it seems many kids aspire to be a DJ.

If you were to tell someone you listened to dance music 5-10 years ago, they would most likely laugh or think of you as a raver who was into the drug scene. Dance music has the pure strength to transform any mood you’re in, and to potentially change your day or any situation for the better. When you went to a low budgeted, underground rave, you could escape from reality and be with people from all walks of life. Whether it’s Trance or Progressive House, dance music has a way to get into your soul like no other music we hear today. You can listen a track like Above & Beyond’s ‘Sun And Moon’ and get goosebumps every single time, along with many other songs that have the same effect.

There is a great article from Rolling Stone’s interview with Richie Hawtin about the evolution of dance music which really sums it up nice. Tommie Sunshine is another advocate on the evolution of EDM and he voices his opinion often on The Huffington Post.

What raves were and what they are now: Raves used to be a beautiful thing: people who did not have an abundance of money flashing bottles and tables at huge venues meeting up anywhere to celebrate music. It could be a field, warehouse, or small club, and you were always able to have a great time with other enthusiasts from all walks of life, struggles, and existence. A rave was an escape from reality, 6-8 hours of pure enjoyment and dancing. A rave now is a totally different story, a commercialized story that is. There are no secrets about raves anymore- they are highly publicized and advertised events throughout the world. The traditional rave has been replaced with steroid injected versions: world-famous producers are brought in, huge light shows created, and tens of thousands expected to be in attendance. Overpriced drinks and water, ridiculous ticket prices, and it’s all about making a profit. These high-profile settings also go against where EDM came from in the past. You now have “Drug den’s” instead of a place where everyone can enjoy the music. Fist pumping teenagers with not a slightest clue that Tim Berg is Avicii or the difference between Progressive House and Deep house. Believe me, I am all for the popularity and wide acceptance of dance music in 2013, but there is a limit.

How much bigger can EDM get? With the mass abundance of DJ’s and similar sounds throughout the dance music world, how far can it go? Many of these Djs are extremely talented, but there are also a few (won’t say any names) who really shouldn’t be up there in front of thousands of people. Who wants to go to a festival now where you can’t move and there are 150,000 people there? It is definitely a good time, but we miss the days where it was the true dance music fans, not everyone trying to jump on a bandwagon. Taking a look at the tweets after Tiesto’s Club Life College Tour last week in Albany there were many comments about Quintino. People were saying ‘Wow Quintino is awesome, so glad I found him’, or ‘I have a new DJ to listen to’. Kids, Quintino has been around for a while now, stay off the Molly. Clearly these kids aren’t going to the shows for the music, but to party and participate in using recreational drugs. A lot of kids are coming into the scene for the wrong reason. They hear rappers talking about Molly and then hear the artists who are going mainstream and automatically think ‘if you do Molly you’re cool’. News flash, ecstasy has been around since the 80s, and just because Molly is the pure form of ecstasy, 99% of the time you’re not getting that. This article isn’t about drugs, but it has a contributing factor into why dance music has changed.

You now have companies like Dayglow who hopped on the the scene, commercializing dance music into a rave with paint and a mainstream DJ. It’s not like you won’t have a good time at a Dayglow event, but if you are a true dance music fan you are probably saying ‘I’ll Pass’. The talented and true DJs are still out there such as Tommie Sunshine, Richie Hawtin, Boris, Paul Van Dyk, and many others, but the way EDM has evolved, it has taken a lot of the talent away.

Commercialism isn’t what dance music is about, so the question really is- where will dance music head from here? Will it get so popular to the point of being played out, or keep skyrocketing and become the staple of music for years to come? What are your thoughts on this?

For those crazy animals who survive the Zoo and want to keep the party going, PachaNY and RPM are bringing you Subliminal vs. Dirty…