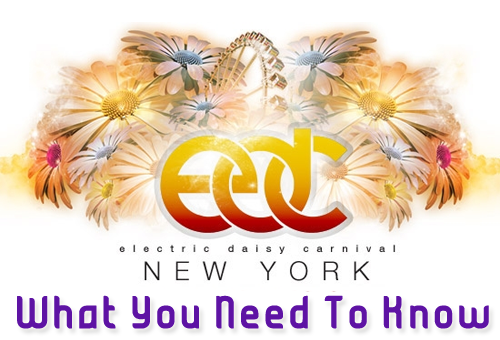 The return of EDC to New York for its 2nd year has now arrived. This year we physically will move to New York as Citi Field plays host (officially the 1st time in NY and not a “return”) and we’ll shine a spotlight on what each day has to offer with ‘Everything You Need to Know.’ We’ll break down what sets you can’t afford to skip out on and what we are dying to hear this weekend. Stay tuned tomorrow for Saturday.

To start, we’re waiting on a planned EDC layout, so we can get familiar with where each respective stage is. Questions still to be answered. Will the main stage be inside the stadium, will the stadium have any stages? And if you are still questioning if you should attend, just buy your ticket here and worry about that credit card bill next month.

When it comes to transportation Insomiac has laid them out in great detail, and with thousands of people heading to the festival each day, it is best to plan ahead. See Here. Things could get a little crowded on the 7 train and if you don’t mindpaying a few more bucks, the LIRR might be the best bet from NYC (plus who doesn’t want to keep the pre-game going on the train)[NOTE: You can’t have open containers on NYC Subways] .

Stay hydrated! It could be a long warm day in Queens. Remember to drink plenty of water, which you won’t have to pay for at the provided free water re-filling stations. All other FAQ’s can be found here

Equally as exciting, to really put the ‘carnival’ into EDC, full-size carnival rides will also be scattered across the Citi Field parking lots, including slides, swings, merry-go-rounds and more. Best of all, every single ride is FREE and will be up and running all day and night! All of that alone is pretty exciting, and we haven’t even mentioned the music yet!

Most importantly make sure to tweet at us during the festival with your pictures and favorite moments! (@electronicoasis). [Cell service is usually terrible, so turn off the 3G and plan out your meeting points when the night is over in case your phone dies, so you don’t leave any friends behind!]

Now, let’s dive into Friday after the jump! If we missed anything let us know!

kineticFIELD
Eric Prdyz – Finally making it to America last year, Eric Prdyz hasn’t lost his touch since arriving to North American audiences. It is highly recommended that you check out this set as this might be the best set you hear all weekend.

circuitGROUNDS
Arty – Over the past few years, Arty has taken the dance music scene by storm with his uplifting and powerful progressive/trance style tracks.

neonGARDEN
Richie Hawtin – Richie Hawtin is a pioneer and was granted his own stage at the festival and curates his own lineup. He has his first compilation album since 07 coming out on his label MINUS this month and he will probably be playing new material from that. It’s a perfect escape from the main stream EDM sound and the shoulder to shoulder people at the main stage.

neonGARDEN
Maceo Plex – The mysterious maestro of deep dark house and 50 shades of nu disco is making his annual pilgrimage to NYC, this year playing Richie Hawtin’s stage at EDC. There will be no fist pumping during Maceo’s set, so do not ruin the mood by attempting to bring your EDM sensibilities. Maceo just released his latest critically acclaimed installment of ‘DJ Kicks’ so you would be naive to miss his signature journey in a festival setting, where he has already promised to drop a few of his new tracks. But Maceo, pretty please will you play a secret warehouse after party??

Wide Awake Art Cart
Hyperbits – Their productions have been massive. (Have you heard the Alive remix?!) They have showed their versatility as of late with one of the most talked about sets at Cielo that featured hypnotic techno and deep melodic tunes to their more main stream sets which feature more big room progressive and driving trance tracks in addition to their own club edits. It was a pleasant shock to hear them drop Slides -> Strobe -> Grindhouse (DubFire not Albin Myers) -> Alive (Hyperbits Remix) last weekend at Santos Party House.

circuitGROUNDS
R3hab – We’re anti music that involves loud annoying bleeps and chainsaws. A.K.A anything on Wall Recordings. We gave up on that a while ago. (Sorry Samantha)

circuitGROUNDS
Steve Angello – Unless we will be hearing something from his other monikers ‘Mescal Kid‘ or ‘Who’s Who’. Odds of hearing anything other than mainstream: unlikely. Stay away and treat yourself to Eric Prydz.

Check back tomorrow as we look at Saturday!