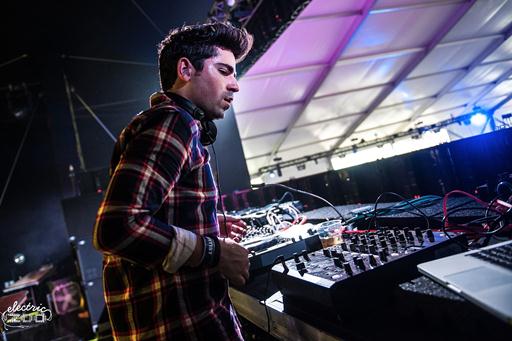 Felix Cartal may have the greatest head of hair in all of electronic music. But that’s not all you should know him for, as he consistently creates forward thinking dance tracks that fit nicely into a harder electro niche, without the kitsch. He sat down during Electric Zoo to give some perspective into his love of Britney Spears and his unique collaboration style, so read up. Also take a minute to check out Felix’s latest release, his remix of Steve Aoki and TiÃ«sto’s ‘Tornado.’ Perhaps fitting given the recent spate of inclement weather here in New York. Pick up your copy on Beatport.


“If someone said this was the person I shouldnâ€™t collaborate with, thatâ€™s who I want to work with.“

Can you tell us how you progressed from being in a punk rock band to making electronic music?
When I was in my band, I started getting into software on the side and I was making weird interludes for our album, between songs and for when we played live. When my band broke up I didnâ€™t really know what to do, so I started making full songs and thatâ€™s pretty much how it started. I didnâ€™t know what I was doing though, thatâ€™s the main thing to take away!

How does that musical background influence you productions?
I think there will always be the aggression that I take from punk rock, just like I enjoy high energy music live. On the flip side, I think that Iâ€™m always trying to push genre walls, Iâ€™m always happy to do that, like if someone said this was the person I shouldnâ€™t collaborate with, thatâ€™s who I want to work with. Iâ€™ve tried to pick different singers that are inspiring to me, but maybe donâ€™t have a profile in the dance world that I think would be interesting and I think people should hear.

Rumor has it you’re a huge Britney Spears fan. Do tell why and how you came up with your ‘I Wanna Go’ bootleg.
Ha! I just stole that accapella, it was a total bootleg. Britney Spears is the pop start that I grew up with, Iâ€™ve literally seen her entire progression, from â€˜Hit Me Baby One More Timeâ€™ to that red spandex thing in â€˜Oops I Did It Again.â€™ I remember it coming out and I was 16 and my friends and I were all just, whoa sheâ€™s the hottest. I feel that I like her because sheâ€™s the pop star that I grew up with, and she has a really wide array of music, for example I think that â€˜Toxicâ€™ is one of the best songs ever made. I think that song is fucking amazing, I just love the sound of her voice. I would collaborate with her, but it would have to be in the right way. I donâ€™t think I would want to be credited on an album for her, but if I was able to work with her Iâ€™d want to do something different.

You launched your Weekend Workout podcast this year, can you tell us about the inspiration for the name?
For me it was basically that people have always been hitting me up, asking to send them music for when they go on a run or when they go to the gym. So I thought that was a market that wasnâ€™t being tapped, and obviously dance music works really well with fitness and for me it was a motivator for me to personally stay fit. Iâ€™m doing ti for people who want music for the gym and it can be more than that. The Weekend Workout can be interpreted in different ways, and that can be going to a party, take it how you want. And now itâ€™s on Sirius and iTunes and itâ€™s going really well.

How do you pick out tracks for the Weekend Workout?
I have a couple of friends that send me tracks that I really trust and I receive promos through email. I also keep a lookout for anything that interests me. I have been playing Dyro out live now and I hadnâ€™t really heard of him until I started doing this. Also, Botnek are local guys from Montreal and they did a remix for me. There are many I like.

What’s up with this disposable camera project?
Sort of half by accident, I always have one with me and I decided that I wanted to start taking photos at my shows with disposable cameras. I got to a show really late and I was like, fuck, I don’t have any time, so I just gave it to someone and asked him to take photos and then give it back to me. They were really random and awesome, and I thought now THAT is the way I should do it, just give it to the control of somebody else at my shows to get a first person perspective, like a POV shot from in the crowd. I’m kind of hoping it catches on, so that people start asking me for the camera. I think those people will be motivated to get crazier and crazier with their photos.

Are you looking forward to playing on the Dim Mak stage at Electric Zoo after your appearance on the main stage last year?
My music’s changed a lot in the past year, and I have some exclusives that I’m going to play out today. I’m going to yell out on the mic when I play them [laughs].