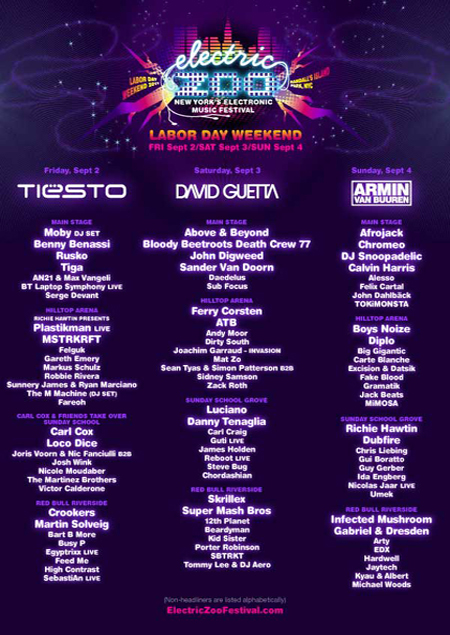 ZOO TIME IS FINALLY HERE =D. We’ve put our heads together and constructed a little guide for your Electric Zoo Festival experience this weekend. I recognize that people have their own favorite artists and desired genres, but this guide will offer our thoughts on who you should see each day at each of the four stages. READ MORE AFTER THE JUMP.

After putting out ‘Thoughts Become Things II’ under his alter ego (Dakota), Markus Schulz has been on an absolute tear in 2011. Over the past 12 months Markus has played close to 150 gigs while still constantly updating his weekly Global DJ Broadcast show. He was the first act that I saw at Electric Zoo Festival 2010 and I was stunned at the amount of energy that this guy brings to the stage as a performer. His dark, mysterious sounding sets are unlike any other. My brother, Robert Palliser, simply puts it as ‘he unleashes fury on his crowds.’ While his performance won’t compare to his June 17th PACHA NYC 6 hour magical journey that he took people on, I assure you he will have the Hilltop Arena rockin’ from 5:15 – 6:30.

Toss up on this one. I’m a huge Tiga advocate and can’t get enough of the disturbing electro that he drops during his sets. That being said, you can’t go wrong with a ear-wobbling, head-banging Rusko performance. I remember trying to get into his tent at Ultra this year and the place was too packed to even grab a cigarette out of your pocket. I applaud the management of EZF for removing Rusko from theÂ outerÂ tents and letting this Brit dubstep the whole main stage to himself. Guy puts on a SHOW. Find him at the Main Stage from 4:50-6:05 PM. Moby kicks ass as well.

SebastiAn, who has jsut recently dropped the capital A (now would be Sebastian), is a well respected French electro artists signed to renowned label Ed Banger. He has done officially commisioned remixes for artists like Daft Punk and Cut Copy, along with producing amazing originals and Uffie tracks. Known to be a semi-recluse, SebastiAn is playing in the states for the first time since the Ed Banger 7th birthday party. He is also debuting his live show at EZF, and there will likely be an onslaught of other DJ’s and producers lined up on stage to watch the magic happen!

Carl Cox, the legendary champion of techno and acid house, will be closing out the Sunday School Grove Tent on Friday. The man is one of the best DJ’s of all time and has been in the scene for multiple decades. The King of Groove had his tent going wild at Ultra this year and I expect the same type of performance this year at Electric Zoo. CC hits the stage Friday at 8 PM. SEE YOU THERE.

The guy is rising at an unfathomable pace right now. Every artist,Â despiteÂ what genre they produce, can’t stop raving about Skrillex and the work that he has put out this year. His ‘Scary Monsters and Nice Sprites’ EP dominated the Beatport charts for months and his more recent songs, such as ‘First of the Year’ and ‘Ruffneck’, have share similar success. I saw Skrillex earlier this year at Webster Hall and his show was just a straight up party. Even if you aren’t into the dubstep scene, go get a Skrillex performance under your belt.

Sander has experienced a quick rise in the industry and with has an upcoming album due out in September called, ‘Elev11.’ The album features tracks you already know like ‘Koko’ and ‘Love is Darkness’ to other unknown gems such as ‘Eagles.’ I saw SvD previously this year at Pacha NYC and it was one of the best performances that I have seen at that club to date. While he is labelled as a trance producer, his sets contain all sorts of genres and sounds which make them that more entertaining. My only objection to this pick is that I have yet to see Bloody Beetroots Death Crew 77, which I am VERY excited to see.

After recently interviewing Joachim Garraud and watching an endless amount of youtube clips, I can’t rave enough about his INVASION show. After working on a number of remixes and productions along side Mr. Guetta, Garraud has imposed a new concept in which he blends DJing with musical improvisation in order to give a true performance. An absolute musical technician that is a straight monster on the keytar and a number of other different instruments. Get ready for the Space Invasion!

Sunday School Grove: Luciano
Luciano’s mixed Swiss & Chilean identity shows in his music, a somewhat mystical blend of deep techno & electro that integrates southern elements in rhythms and colorful patterns in sound. Mellowing his style as times goes by, getting more experimental and spacey with a fresh style of his own, Lucianoâ€™s production is destined to the wiser dancefloors that have enjoyed his live sets. Catch him closing out Sunday School Grove Friday Night.

If you read my writeup on Boys Noize for EZF Spotlight, then you know how big of a Alex Ridha advocate I am. The guy is unbelievable and his performances are nothing short of epic. I’ve seen Armin close out EZF for the past 2 years and I wasn’t head over heels aboutÂ either set. For this reason, do yourself a favor and go watch this German legend throw one of the best parties of the weekend Sunday night in the Hilltop Arena.

Don’t get me wrong, I would sit at this stage from 11 AM – 11 PM and have an amazing time. Every act that is hitting the main stage on Sunday is AWESOME. From the uprising Alesso (who was great at Pacha NYC recently), the production wiz John Dahlback, some AFROJACK muzik, to the legendary AVB. Oh and DJ Snoopadelic. This being said, Calvin is a hell of an act to catch. I remember seeing him for my first time at Roseland Ballroom last October where he accompanied Kaskade and Deadmau5. On top of his stellar productions, he dropped tunes like ‘Stranger to Stability (Len Faki Podium Mix)’ and ‘Wippenberg – Pong (Tocadisco Remix).’ Great show. Great DJ. Catch him main stage at 4 PM.

Arty (real name Artem Stolyarov) is a 21 year old Russian producer who has put out some unprecedented tracks over the past few years. From ‘Around the World’ to ‘Rebound’ and with his latest release, ‘Kate,’ the kid could simply do no wrong. All of us here at EO are huge supporters of this kid (and Mat Zo) and can’t wait to see his live performance. He will be at the Red Bull Riverside tent starting at 2:15 PM.

Richie Hawtin is well known in the industry as one of the leaders in the minimal techno genre. As one of the creators of the Traktor software, Hawtin utilizes the program to create some extremely technical and innovative DJ sets. Lots of layers, lots of bass, lots of minimal. Richie will be closing out the Sunday School Grove tent on Sunday.

It’s Sunday and many of us are hungover. In honor of the whiny occasion, we present to you the first installment of Soundcloud Sunday….