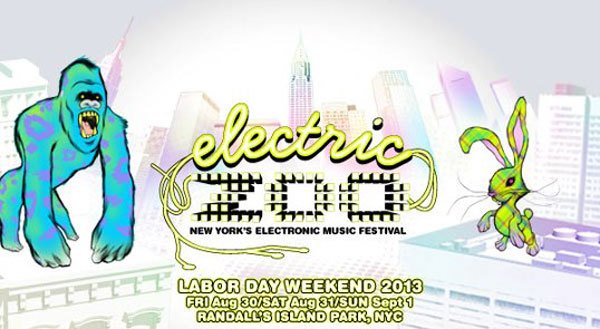 Electric Zoo’s 5th installment featured some of the biggest acts in dance music, wild new stage production, and some of the largest crowds the island has ever experienced. The three day event was cut short due to the tragic deaths of two festival goers. Now the entire scene is in the spotlight and getting media coverage like never before. All the negative coverage has made it hard to remember what the weekend was really all about. We all traveled to the island for three days of peace, love, unity, and music beats? These are some of the highlights from the weekend.

Made Events
The team behind Electric Zoo made the fifth year of the festival something to remember. They brought us expanded festival grounds with an entirely new stage and then packed it with huge names like Knife Party, Benny Benassi, Bassnectar, and Bingo Players. Main Stage East was not just another stage dumped on the side of the island. The expanded grounds featured all the amenities of the rest of the island. Main Stage East had its own free water refill stations, bathrooms, food and beer options, and a huge grassy sitting area that provided a beautiful view of the new stage. Each stage got a complete overhaul making it bigger and better than the year before. The Hilltop area was transformed into a circular stage in the middle of the tent and Riverside got the 3D treatment for Dog Blood and A-Trak’s performances. Everything about EZOO5 felt more polished than the years before. Water Refill Stations were fast and friendly even towards the end of the night when crowds flooded the island. If you were hungry there was a tent serving something you’d like. From your basic burger all the way to the obscure Korean sandwich stands EZOO5 had it all thanks to the team at Made Event.

Dogblood
We would hate to discredit our boy Alex Ridha but ‘Skrillex!!’ was the reaction everyone had when they heard Sonny was going to be at EZOO5. Alex and Sonny teamed up and played under the name Dog Blood and not so quietly stole the show. The American Dubstep machine and the German house heavyweight closed the Riverside tent with all the oddities you’d expect out of the two madmen. Brimstone, chains, fire, teeth, and barking dogs were all part of the entirely 3D show. The visuals were brought to you by the duo’s buddy Susboy who also does the visuals for RL Grime and Baauer. Those lucky enough to get a spot in the tent got to experience the last Dog Blood show in North America. The duo opened with ‘Middle Finger 2’ and then took everyone on a strange and chaotic journey for about an hour and a half. The boys fit some hip-hop into their set with both the Dog Blood and A$AP Rocky versions of ‘Wild For The Night’ and an incredible ‘New Slaves’ remix. Dog Blood’s set had something for diehard fans of both artists. Boys Noize ‘Starwin’ gave us a break from the hectic opening and had the whole tent grooving for a bit. A new Skrillex track premiered in the tent followed by the classic ‘Kyoto’. The room exploded, as it always does, when the crowd belted out ‘Yo Skrill drop it hard!’ The security guards patrolling the front rail added to the madness by covering the front half of the tent in a heavy mist from the power washers. Between the rain now inside the tent, the 3D visuals, and the acidbreakstep goodness Dog Blood was easily one of the stand out sets at EZOO5.

Diversity
You had Hip-Hop legends Just Blaze and DJ Green Lantern play on the same stage as Brodinski and Congorock. The ‘melt your face off’ dubstep from Excision came right after the ‘million voices’ from Otto Knows. EZOO5 continued the trend of giving new genres exposure and letting fans have a chance to experience new music. There was something for everyone at EZOO5 and hopefully raises the bar for future music festivals to expand the types of artists they book.

The Crowd
This can go under good and bad. This year the animals brought the same energy they always bring to EZOO. Each drop was followed by the pounding of 130,000 plus feet against the flattened grass of Randall’s Island. For the most part the island was filled with good vibes and good people enjoying the music. It didn’t matter if it was the aggressive dubstep set of Flux Pavilion or the always upbeat set from Madeon the crowds came to party and you could feel the energy as you took those first few steps through the gate. That’s also where the good and bad of EZOO5 start. This year the island saw more of that taboo, dark part of the culture than ever before. Shirts, hats, and shorts giving not so sly nods to drug culture were all over Randall’s island and unfortunately made it a real easy target after the deaths over the weekend. The picture of five festival goers walking through the gates with ‘M-O-L-L-Y’ printed on the front of their shirts stood out to us. The looming cloud of drug abuse on the island claimed the lives of two people and ruined a third day for thousands of others.

This year EZOO5 brought some of the most memorable acts to Randall’s Island in the 5 years it’s been having us. We hope this wasn’t the final act in our favorite weekend of summer. The passing of Jeffrey Russ and Olivia Rotondo leave us with heavy hearts. Our thoughts go out to the Russ and Rotondo families. Hopefully we’ll see all you animals next year.

Canadian native, Nicky Romero, comes out with an incredibly progressive remix of Grooveyard’s ‘Mary Go Wild’. If you dont remember this old 1996 dance…