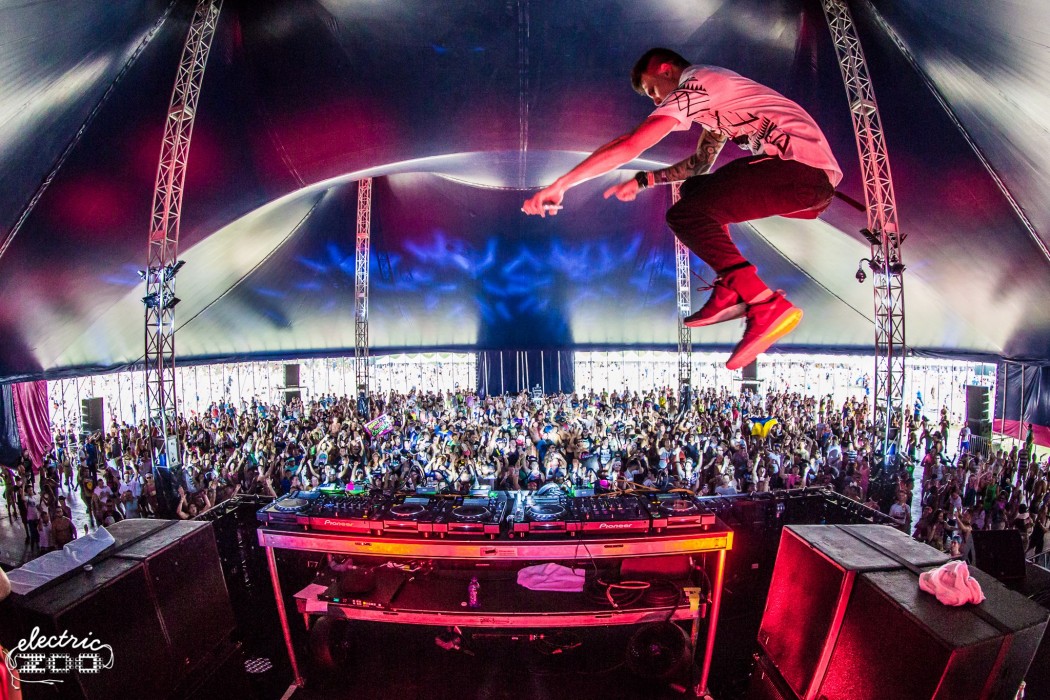 Electric Zoo Festival took Randall’s Island by storm once again, and although it ended in a rainy washout on Sunday, it’s still one of the best electronic festivals in New York.

Entering through a grove of trees wrapped in colorful string lights and neon icicles at night, you have a view of the entire festival spread out before you, with the city skyline as the backdrop. They toned down the production this year: the stages were smaller, the festival ran shorter, and the set up was a bit awkward. This can be attributed to the increase in spending on security and safety precautions. Amnesty bins were located outside the entrance, although we’re not sure they got much use, and attendees were treated to a thorough check of their bags and clothing. Once inside, NYPD cops roamed the grounds, along with “zookeepers,” college-aged medical students and EMTs who wandered the festival offering help to anyone who needed it. This idea allowed medical help to get into the thick of the Main Stage crowd, which can be quite terrifying and claustrophobic at its peak, and provide easy access to emergency services if needed. As far as we’ve heard, no casualties or serious injuries have been reported.

Sunday School brought the famed Spiegeltent, an old circus tent, from Mysteryland USA for their Sunday School Grove stage. Although it was beautiful outside and in, it posed some difficulties in the summer heat. The inside allowed for little air circulation even though an air conditioner was installed on the right wall. And, as Chris Liebing loudly complained on Facebook, the lack of lights and strobes that usually accompany a set and add to its allure really killed the atmosphere. By the time Dubfire came on to close out Friday night, all the lights were turned off inside the tent. This was cool, but also contributed to a lot of tripping over the stairs inside.

Overall, Sunday Schoolers felt a bit jibbed at paying such a hefty price to remain in a small, cramped stage all weekend. However, the after party at Output on Sunday featuring Alan Fitzpatrick, and in impromptu late-night set by Joseph Capriati, more than made up for it.

The line-up itself was amazing. Although a lot of people were looking forward to Sunday, Friday and Saturday also provided stages packed with talent. French DJ Gesaffelstein spun some funky house music with lots of energy in the Beatport Riverside tent, with turned into the unofficial spot for trance addicts on Saturday. Paul van Dyk came on after the more electro-tinged BT and Cosmic Gate to play some hard, pure trance, much to everyone’s delight. Earlier in the day on Saturday, MAKJ played some weird rap and deep house remixes that actually worked and we wondered, could this be the next thing? We were also treated to a spectacular light show and pyrotechnics from Zedd‘s set at Main Stage West. Frank & Tony kept it chill with an extended set at the Vinyl Only stage. In a small grove of trees, the stage was a great place to watch the sunset and feel the positive vibes rise up from the festival.

So how long until the Main Stage can hold talent like Pete Tong and Paul van Dyk? Both DJs could have easily closed out the night at a much larger venue and we’d like to see more credit given to them. And, of course, the legend Danny Tenaglia, who is a veteran of the New York nightlife scene, can pretty much do whatever he wants up there and it will sound amazing.

With the rainout on Sunday, artists and fans alike scrambled to get away from the flooding grounds and venues scrambled to grab the talent in the city for their after parties. Slake pulled through with a great line-up that included Mat Zo, Chase & Status, Kove, and What So Not, to name a few. Marquee also had ATB, while loosening their dress code to allow festival attire.

Electric Zoo has now announced their refund policy for the rained-out Day 3:

We regret that we had to make the tough decision in collaboration with NYC city officials to evacuate Sunday’s show, with no re-entry, due to dangerous and severe weather conditions, including lightning strikes and high winds. We had a great two plus days and thank everyone for dancing with us again this year. Please stand by while we finalize the refund process, more information coming soon.”

The fate of the Electric Zoo’s future remains uncertain, as many are calling it the curse of Day 3. The rain and lightning were dangerous for a few minutes, and some people were hit by lightning in the city, so their worries were not unwarranted. But we wonder if anything else could have been done to salvage the rest of the day. Last year, Electric Daisy Carnival New York was hit with a similar storm and sheltered attendees in MetLife Stadium. Made In America, a rival festival with a wider range of genres in Philadelphia, was also hit with a storm this past weekend, but allowed guests to re-enter the festival once the rain stopped. Time will only tell.

As summer draws to a close and the chill of fall creeps into the air, there is still plenty to look forward to in September, including the long-awaited second coming of TomorrowWorld.

Anything produced by Congorock is pure fun, and adding the talents of Scottish Nom De Strip, you have a funky Electro hit. Both producers…