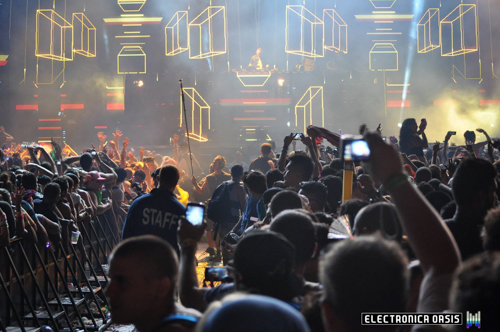 UPDATE: Electric Zoo just updated their website an hour ago with a promising new logo.

A recent article in the Wall Street Journal highlighted the new safety precautions Made Event and SFX Entertainment are pursuing in order to make EZoo 2014 happen.

After the tragic drug-related deaths of two attendees at last year’s festival, the third day of Electric Zoo, New York’s largest electronic music festival and one that can call itself the city’s own, was cancelled. There was a lot of speculation surrounding the future of EZoo, with many concerned that the festival had met its end.

It’s now getting late into April and still no certain word on the festival’s future. Current rumors are that the festival is involved in the lengthy process of obtaining a permit from the Department of Parks and Recreation, something essential for the event to take place.

The promoters have announced many new security procedures to woo the Department into letting them host the festival again. These new measures include drug-sniffing dogs, pat-downs, and undercover cops on scene to discourage drug use, which is not technically allowed or supported at the festival anyway. They will also require attendees to watch an “anti-drug public service announcement” by key members of the EDM community, including Armin van Buuren, before gaining access to the festival. Many DJs have spoken out recently against rampant drug abuse within our community, from Zedd to Kaskade. Their voices are important and helpful, but there is only so much that can be done when it comes down to the actions of individuals. Even van Buuren himself mentioned that it is difficult to control a crowd as large as EZoo, where so many factors come into play.

Another solution put forth by the promoters is to shorten the festival to avoid daylight, thus keeping fans out of the sun and avoiding dehydration and exhaustion. They are also considering having “amnesty bins” located at the entrance for attendees to get rid of any illicit substances before entering the festival, which is a popular tool in Europe.

We think all these new procedures are a step in the right direction, but ultimately it comes down to individual education, awareness, and respect. Whether or not the festival will happen still remains to be seen, but the promoters seem hopeful that the show will go on.

Click Bracket For Full Size Image Today we’re bringing you 3 matchups from our Summer Anthem Deathmatch. If you don’t know what this is,…