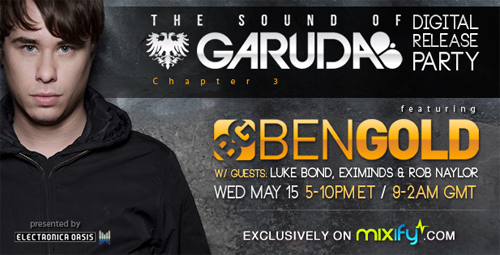 On Wednesday, May 15, we’re proud to bring you our next installment of our monthly Mixify Event series with Garuda Music. We’ll have rising label all-star Ben Gold and a supporting cast of Eximinds, Luke Bond, and Rob Naylor for 4 hours to celebrate the release of ‘The Sound of Garuda Chapter 3‘ (out now). This is guaranteed to be just what you need to get through hump day.

Ben Gold – 8 P.M (RSVP HERE)
Ben Gold is quickly becoming the most buzzed about new trance/progressive producer in the game today. He’s had support from legendary artists like Armin van Buuren, Above & Beyond, & Markus Chulz, and he’s played in front of tens-of-thousands of fans at major festivals all around the world. This week, he takes us on a journey with his highly anticipated for Gareth Emery’s The Sound of Garuda, a task that Ben certainly doesn’t take lightly when he explains ”being the next ambassador of this compilation after Gareth Emery makes me really proud!” Catch Ben Gold’s Mixify debut on Wednesday, May 15 for a special 2-hour headlining set.

Luke Bond has seemingly burst into the scene out of nowhere. In 12 short months, he reached international recognition with 12 releases on labels like Future Sound of Egypt, Garuda, and AVA Recordings (a subsidiary of Armin van Buuren’s Armada). Since then, he’s seen support from heavyweights like Aly & Fila, Paul van Dyk, and Andy Moor and his tracks have become a staple in the popular A State of Trance series.

Eximinds – 6 P.M (RSVP HERE)
Eximinds, comprised of Russian duo Alexander Zhukov and Dmitry Momzikov, first met on an online music forum back in 2009. Their shared interest for music production brought these talented artists together and the two teamed up for a string of successful releases. They’ve remixed tracks for Paul Oakenfold as well as fellow Russian producers Bobina, Moonbeam, and Alexander Popov, the latter of which earned the duo gold status and catapulted them into the spotlight.

Rob Naylor‘s first foray into dance music happened when he was just 12 years old. His varied taste allowed him to pursue productions in everything from house, to techno, to trance. His very first single, titled “YES,” was quickly signed by Gareth Emery’s Garuda Music and has opened up endless possibilities for the young DJ from Montreal, Canada.

John DahlbÃ¤ck – Take This Thing Back

John DahlbÃ¤ck might be a bit of a chameleon when it comes to style, producing everything from euphoric anthems like Life to a mix…