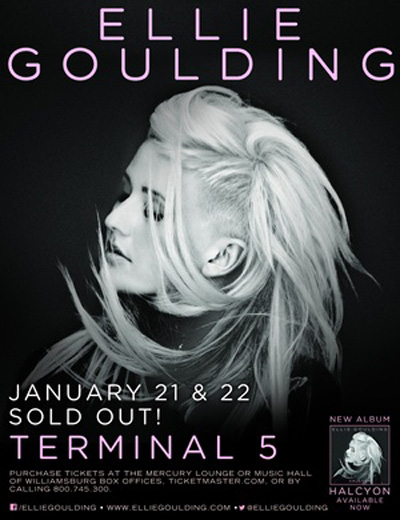 It’s Sunday again. Monday is starting to rear it’s ugly head and there’s nothing we can do to stop it. What are we to do? Break up the routine and take a trip to the west side of Manhattan to see English songstress Ellie Goulding at Terminal 5. You all know “Lights” (especially the Bassnectar remix) and her high profile relationship with Skrillex but there’s a whole lot more to Ellie than her past work with other people. This is the first leg of the Halcyon Days tour and listen to what Goulding herself said to mTV, “I’m so excited to start touring my new album Halcyon properly,” and it doesn’t hurt that the singer is known for passionate, engaging, live performances. Ellie Goulding is a storyteller and is very genuine about wanting to create music that connects deeply with her audience. Give a listen to any of the cuts off Halcyon (Hal-cee-yon) and you’ll understand. The lead single, “Anything Could Happen” (you might’ve heard it in that commercial for Dr. Dre’s Beats headphones) or her collab with dance floor dynamo Calvin Harris “I Need Your Love” show both her range and her ability to create foot stomping songs with powerful lyrics. She’s not new, you know about her, but you’ve probably listened to more remixes with her voice on them then songs of hers. Do yourself a favor and try the real thing, unadulterated Ellie at Terminal 5. You won’t be disappointed. Get your tickets she’s playing two nights, Monday and Tuesday.

21 Year old Frenchman Tom Tyger just came went live with a slew of releases, including a mix for Kronos label, also works with…