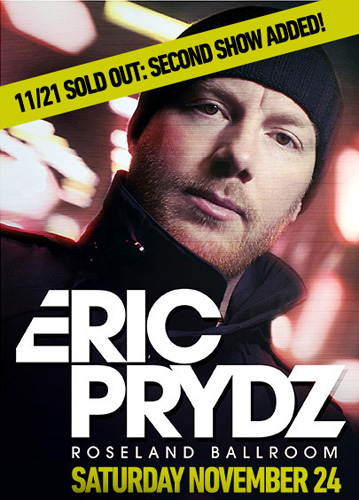 On argueably the biggest party night of the year, Thanksgiving Eve, Eric Prydz will be spinning to a sold out crowd at NYC’s famous Roseland Ballroom. Due to the high demand for the on Wednesday additional tickets we released for a second show at Roseland on Saturday, November 24th. Prydz will be joined by UK based producer Fehrplay, and Alaskan-born producer, NYC resident Tyler Sherritt. Sherrit who has now opened two big Roseland shows (he opened for Dirty South last month), will be spinning from 9-11pm before Fehrplay takes the decks. In preparation for the event, Sherritt has prepared a MASSIVE bootleg and has made it available as a FREE download!

Wednesday is sold out, but don’t miss your chance to see Prydz, get one of the limited number of tickets left for what is sure to be an epic night.

Premiered by Annie Mac on BBC Radio 1, Switch’s new single ‘I Still Love You’ featuring Andrea Martin is a must-listen for any EDM…