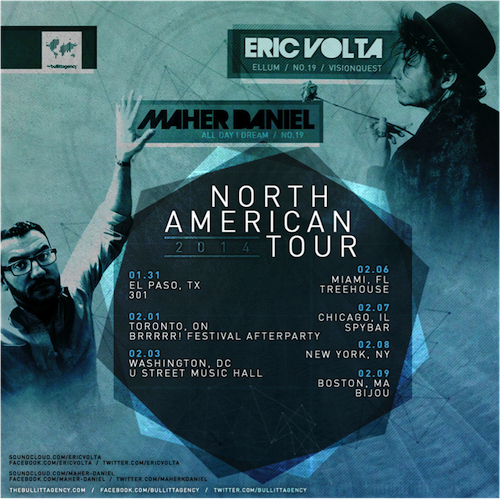 2013 was kind to both producers, and the year culminated with massive releases from each of them. Eric Volta’s ‘Love Your Illusion’ on No. 19 was a certified hit with an impressive list of supporters. Maher Daniel’s ‘Farewell At The Gates of Dawn’ alongside Gab Rhome on All Day I Dream was a true masterclass in moody, melodic house music.

After well-received performances at The BPM Festival, where Eric played the No. 19 showcase and Maher played at All Day I Dream, the two promising upstarts are set to tour North America together in 2014.

To prepare for the tour, both artists will be sharing some music on SoundCloud. Eric Volta is giving away a track which he has produced in a recent 30 minute jam session which is a true testament to his production ability. Maher Daniel is giving away a 40 minute mix that showcases some of the deeper selections he will be playing out.

Catch them this Saturday as they are headlining a Verboten show at Paperbox in Brooklyn.

Get your tickets while they’re available!

Ah, finally the marriage of one of the two biggest young names in dance music right now. Zedd and Nicky Romero have been blazing…