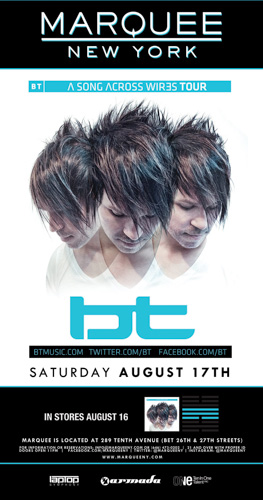 BT writes the kind of uplifting electronic music that fills rooms and hearts. While he primarily produces trance tunes that are often featured on Armin van Buuren‘s A State of Trance radio show, he has also developed his talent in the areas of ambient chill-out and cinematic scores. With a wide range of production styles and a long career to back it up, BT is one of the premiere DJs of our generation. On Saturday night, he will be at Marquee NY to celebrate the release of his ninth studio album, ‘A Song Across Wires.’ The album features one of his greatest hits, the gorgeous ‘Skylarking’ off of A State of Trance 2013 and is also his debut release on Armada Music.

In an interview with Only The Beat, BT talked about how the album was directly inspired by what’s happening in electronic dance music today: “It’s really the first time in years…where across a broad swatch of music, I’m hearing inspiring things everywhere.” He said he designed each track on the album to work in a festival setting, to encourage the new culture that is springing up. The album includes more vocalists and collaborations than his earlier work, including songs with tyDi, Tritonal and Arty. You can pre-order the album in preparation for what is sure to be amazing set at Marquee.

Vice vs Kairo Kingdom – Take That (Kids At The Bar Remix)

‘Take That’ remix by Kids At The Bar starts immediately with thumping bass that quickly builds to a fast moving tempo of Electro House….