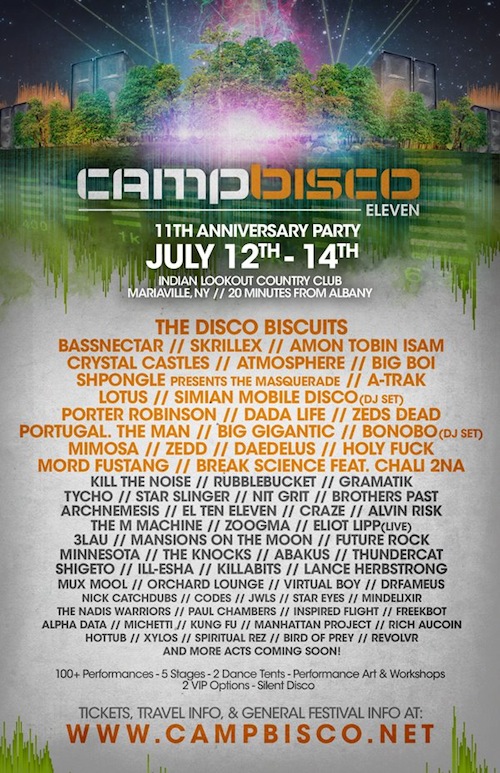 If you’ve never heard of Camp Bisco before, you’ve definitely been missing out. Hailed as the Northeast’s largest Electronic Music festival, this all-ages event features three nights of great music (with over 100 artists), rain or shine, and is run by jam band The Disco Biscuits! Camp Bisco is an outdoor festival (with camping) set on the Indian Lookout Country Club in upstate NY, boasting tons of top acts as past headliners such as Cut Copy, Wiz Khalifa, Bassnectar, Rusko, Skrillex, Nero, LCD Soundsystem, Girl Talk, Pretty Lights, Major Lazer, Diplo, Kill The Noise, and so, so, so many more.

This year’s Camp Bisco is the 11th edition of the festival (and the 6th edition at ILCC), and features two side-by-side main stages, two dance tents, as well as a “Silent Disco” and an “Up & Coming Stage”. Some new features of the event are LOWER CAPACITY (if you were there last year, you’ll definitely understand why this is a plus!), larger dance tents, increased venue facilities, wooded camping options, long distance shuttles, and three main gates for quicker entrance.

As of today, there are no longer any Early Bird prices on tickets. General Admission tickets are $170 ($20 car camping fee not included) and include non-car camping, parking, and entry to all three days of the event. There is free use of potable water, shower facilities, and portable toilets on site, as well as ATMs, pay phones, food & craft vendors, and a ‘general store’ for all those items you may have forgotten to bring.

Make sure to get your tickets now because they’re sure to sell out soon since the lineup was released today!

Another exciting feature of Camp Bisco Eleven is the eighth edition of the color wars. Every year on the Friday of Camp Bisco, warriors of Green, Purple, Yellow and Orange descend on the main stage field to compete in battles of skill, strength, and smartsâ€¦and this year is no exception! Of course, old favorites such as dodge-ball, tug of war, biscuits trivia, and the campground marathon will return, as well as some new surprises!

We’ll be featuring more Camp Bisco-related posts leading up to the event such as Camp Bisco checklists, what to expect, highlights from past editions, and more. Stay tuned!

Rob Threezy is at it again people. Following up ‘Chicago On Acid‘ – probably THE most destructive track of 2011Â is his new production with…