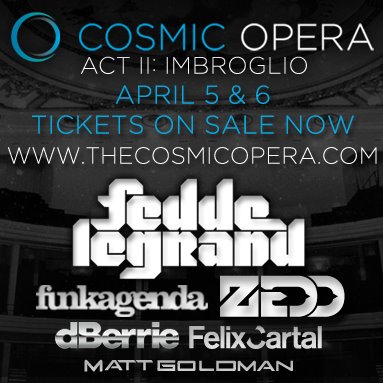 Cosmic Opera is back with their second installment, and the line up is as eclectic as it is awesome. Fedde Le Grand is headlining both nights, with big support from Funkagenda, Zedd, Felix Cartal, and 2 EO favorites: Matt Goldman and David Berrie who is playing under his progressive alias, dBerrie. Coming off the massive success of Act I, Act II aims to be a bigger production and hit harder. It is pretty clear that the line up reflects the new direction of Act II. Cosmic Opera founder Justin Cohen has gone on to say “As it would be for a true Italian opera, our first Act was an overture. It was the initial combination of opera, theater and EDM. In Act II we will continue to build the event series and go deeper to explore the possibilities of Cosmic Opera with Imbroglio.” Below you will find dBerrie’s remix of Gotye’s chart-topper: a song that Fedde Le Grand recently dropped at Ultra Music festival. You will 100% hear this track. Buy tickets for this momentous event HERE for Thursday and HERE for Friday.

Gotye – Somebody That I Used To Know (dBerrie Remix)

Click Bracket For Full Size Image Today we’re back with our Summer Anthem Deathmatch to bring you match 1 of the Semi-Finals! If you…