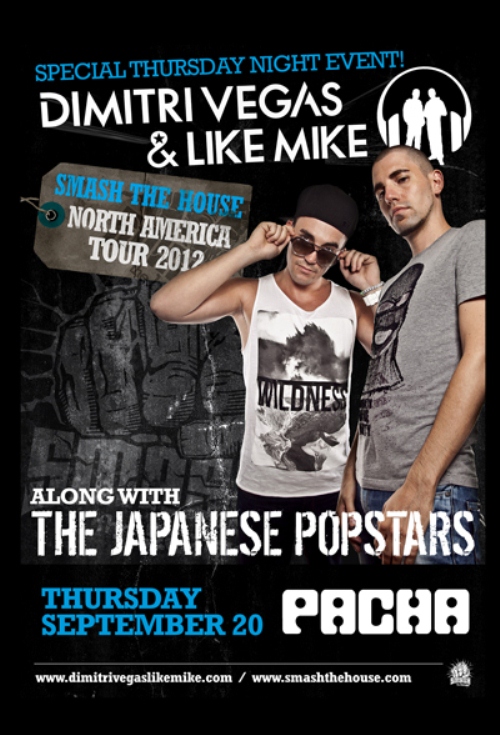 After scorching the earth for the last two years, Belgium brothers Dimtri Vegas & Like Mike are bringing their fire to Pacha this Thursday as part of their â€˜Smash the Houseâ€™ North American Tour. With two Tomorrowland anthems under their belt and three current tracks in the Beatport charts, the duo will surely be bringing the house down. Come see why they have been headlining sets at global hotspots like Ministry of Sound and Pacha Ibiza all summer.

The boys will be supported by The Japanese Popstars, an Irish trio who are no strangers to New York, having played at the Dance.Here.Now Festival at Governor’s Island last summer and Webster Hall last fall (alongside the then little known Knife Party). While some of their studio tracks have a beautifully mellow sound, expect them to bring the heavy when they close out the night.

And if that wasnâ€™t enough heat for you, New York based Tyler Sherritt will be returning to the decks, following his successful opening set for John Dahlback and Deniz Koyu earlier this summer. Be sure to start your weekend off with a bang â€“ grab your tickets here.

Finally we bring to you the epic release of Zedd – Slam The Door. We previewed this track for you back in December, but…