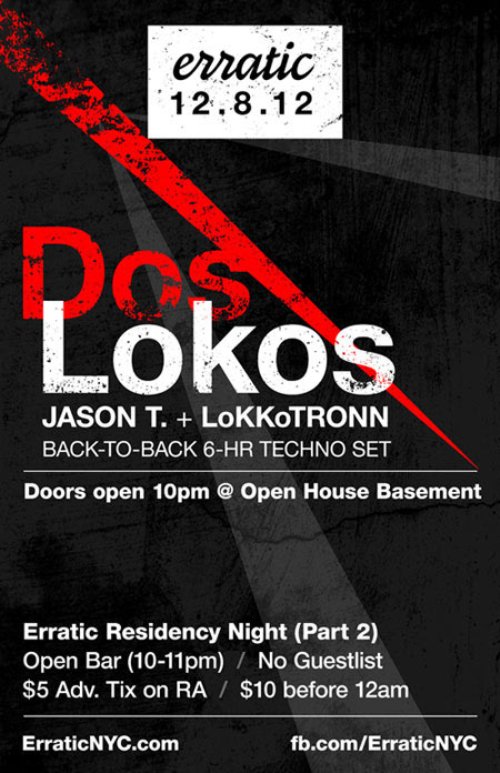 Established in 2011 by techno aficionados and DJs Jason Tavarez (Jason T.) and Nico Tedesco (LoKKoTRONN), Erratic has become an exclusive emblem specializing in true techno promotion and event curation in NYC, bringing a special niche to the techno scene that had been missing from the city’s nightlife. Priding themselves on celebrating techno in its purest form in an all-inclusive environment (for a refreshing change), in the last 18 months Erratic has already hosted the likes of Perc, Donor/Truss, Forward Strategy Group, Dadub, Inigo Kennedy, Ascion, Pfirter, and Luis Flores. On top of that, the bi-weekly Erratic Podcast Series has featured over 30 exclusive techno mixes from key artists in the industry as well as the Erratic founders and residents. For a taste of these exclusive mixes be sure to check out the recent podcasts from Jason T. and LoKKoTRONN below.

To show appreciation for the continued support from their fans, this Saturday, December 8th, Jason T. and LoKKoTRONN will play a back-to-back set for 6 hours under their collective and acclaimed staple act known as Dos Lokos at Open House (formerly Stay) in the LES. As the boys are promising that this 6+ hour journey will showcase and reach into all the different textures of the genre, this is certainly an opportunity not to be missed! And don’t worry if you are not in the area – part of the evening will also be available via live video feed at www.ElectronicRhythm.com. Please visit the event’s Facebook page here for more details and ticketing information, and be sure to show your support for Erratic by liking their Facebook page and following their Soundcloud for free downloads of their podcasts.