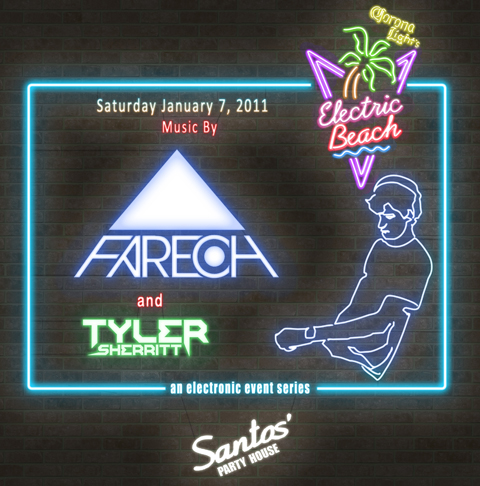 After a three-week long break, Corona Light’s Electric Beach will be back at Santos Party House NYC this Saturday, January 7th. The year 2012 is going to be bringing some big name talent to the legendary decks at Santos and itâ€™s all beginning this weekend!!

Kicking off the New Year, returns DJ Fareoh!! His last appearance at Santos was one that attendees and press are still buzzing about. As one of the youngest DJs on the William Morris roster, Fareoh has been making his name and music well known all around the world. Although busy with shows, Fareoh has been continuing to produce tracks with that unique sound we are all growing to be very familiar with. Electric Beach partygoers are in for an extra special treat this Saturday, as Fareoh is expected to drop his new vocal mix of â€Žâ€2012â€. In the past two months he has performed at some of the top venues around the country: LIV Miami, Marquee Las Vegas (where he played alongside Benny Bennassi), Lavo New York and now back to Santos Party House NYC.

Opening the night for Fareoh is a new, young, and very talented DJ/Producer. Tyler Sherritt, a West Coast native, he has been ready to play on the Santos decks since he arrived in New York a couple of months ago. This young artistâ€™s newest track, Maze, with First State was released on Magik Musikâ€™s recording label, back in September, and has been played by several artists and for millions of people around the world. Tyler will also be closing Pacha NYC for Arty next weekend. (GET TICKETS HERE)

Our friends over at LP33 TV informed us of a Swedish House Mafia giveaway which includes various special prizes! Click here for all the…