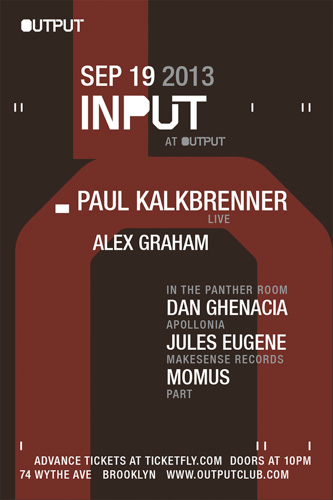 The Input at Output parties on Thursday nights bring in some top tier underground talent. This week, German DJ producer Paul Kalkbrenner is making the trip to New York to play a set for Output’s crowd. The DJ has also flexed his film skills, producing a soundtrack for the film ‘Berlin Calling’ as well playing a staring role and assisting with the story production. The soundtrack is an excellent example of the minimal techno Kalkbrenner specializes in, filled with chill vibes and crisp beats, and pleasantly emotional at times, a quality not often attributed to techno these days. It is music for contemplation and movement. His style remains unique and feels current, even though his first album was released back in 2001. If you’re looking for something different this Thursday, we highly recommend you check Kalkbrenner out for a night of minimal techno. Give a listen below. Doors open at 10pm and advance tickets are only about $20.

The mastermind behind the Erase and Tropical Heat record labels, also known as Wasabi, teams up with Haze-M for this ever-funky release. Released today…