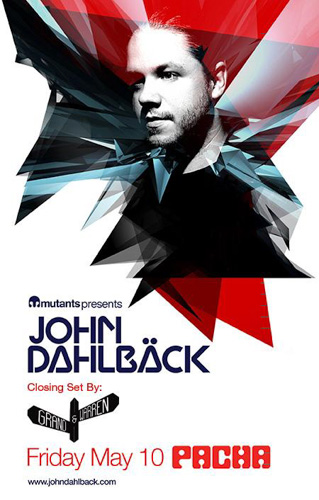 Swedish music producer and DJ John Dahlback will be bringing his infectious progressive house tunes to the decks of Pacha NYC on Friday, May 10. Closing out the night will be up-and-coming DJ duo Grand & Warren from New Jersey.

Since landing his first record deal at age 15, John Dahlback has been producing a massive amount of hits on various labels, including Toolroom and Spinnin’ Records. Dahlback might be most known for his progressive house anthem ‘Life,’ which was featured on Tiesto‘s ‘Club Life: Vol. 2 – Miami’ compilation in 2012. His discography not only includes four full-length albums that showcase his talent for producing lighter, delicate house tunes but also an impressive array of harder electro house remixes. Dahlback’s newest single, the fiery ‘Nuke,’ was released on May 6 on his Protocol Recordings label and expect this one to drop on Friday night.

Grand & Warren are DJ Gary Rabbit and James Alexander hailing from northern New Jersey. Since they started producing various house tunes and mash-ups together, the two have been featured on popular New York radio stations like 92.3 NOW and 103.5 KTU, as well as making appearances at clubs such as 4Sixty6 in West Orange and Bliss Lounge in Clifton. Their standout track right now is ‘Waiting For Aiden,’ one that’s sure to keep the dancing crowd happy long after Dahlback leaves the decks.

Pick the turkey out of your mustache and skip shopping on Friday. Eric Prydz, Lee Foss and Sunnery James & Ryan Marciano are just…