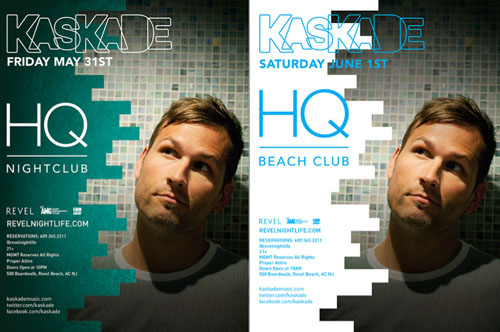 Ryan Raddon, known as Kaskade, who has been nominated for a Grammy for Best Dance/Electronica Album for his most recent album, “Fire & Ice, will come to Atlantic City, New Jersey for a two-day event. The first event will take place inside Revel Resort at the HQ nightclub on May 31, 2013. The second event will take place at the newly opened HQ Beach Club located by the boardwalk on June 1, 2013.

Kasake is coming off the huge success he had last year with his Freaks of Nature tour featured across the US. He has us anxiously awaiting for what he will come up with next. There are rumors of Kaskade Presents: Summer Lovin Summer 2013″. So I guess we are to assume he’s planning a grand tour for this summer saying ” @kaskade: Summer 2013 plans get ready!!” Currently, according to his website a few dates have been listed with a few dates for an atmosphere tour with the quote “Big Rooms….Small Tour”.

So as we see Kaskade has some exciting plans coming up for fellow EDM fans. Soon a new single with the styles of Swanky Tunes and the voice of Canadian native, Lights (Valerie Poxleitner) will be released. Stay tuned to http://www.electronicaoasis.com/ for more updates.

Sevag’s first major release on Cr2 Records ‘The Heat’ is out now and it sure is one for the books. We know he is…