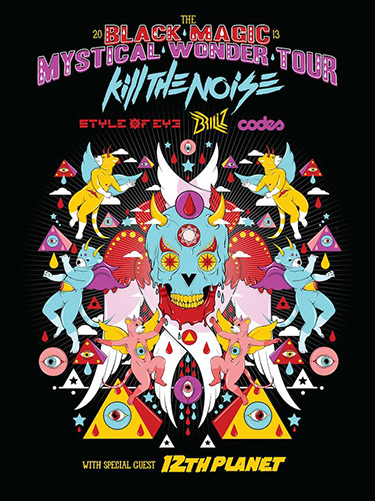 Kill the Noise has been rocking all over the world seemingly non-stop, for the past year. He was here rocking Manhattan’s west side on Halloween at Pier 94 and even before then he’s been jetting around the globe playing to huge crowds of adoring fans. From Miami to Jakarta, Houston to Bangkok, the Rochester native just won’t quit. This time his stop in NYC is just one among a whole tour that’s bouncing up and down America and Canada. With his homies Brillz, Codes and one of his stage partners from Pier 94, Style of Eye there’s going to be some madness wherever they touch down. Be on the lookout in your town because LA legend 12th Planet makes a few guest appearances at a few of the tour stops.

Kill the Noise will certainly be playing a few of his own tracks from his Black Magic EP even if some of them might be remixes of them like his remix of “Saturn” his original track with Brillz. Speaking of Brillz, he’s going to be pushing his own particular brand of funky beats which is a sound hard to put into words. For a sample check out the song “Ratchet Bitch” a bass driven, trap rhythm with strange bleeps and aggressive builds. Whatever Brillz does, he’s doing it well and his songs are hard to stop listening to.

Style of Eye ostensibly has a more club friendly, synth driven electro sound but is another producer you just can’t pigeonhole. Check out his latest track “After Dark” with Tom Staar which has a strong topline, and an easy, bright sounding melody that builds into a pitiless bass assault that shows you exactly why you never know what to expect from Style.

Opening for KTN with the other members of the crew is New York native Codes whose music we won’t even attempt to categorize. Check out his soundcloud and listen to “Mi Casa” or “In Your Brain” to hear the unique, utterly original, uptempo funky music this dude puts out.

Last mentioned, but certainly not least 12th Planet is coming through to hang out with the crew and bring the ruckus on this occasion. You know 12th Planet from his collabs with Skrillex and Kill the Noise as well as him just generally being a boss and making awesome dubstep. He also has a sense of humor peep his video with Dillon Francis recreating the pottery scene from Ghost.

The Highline Ballroom is a beautiful, intimate venue, with a killer sound system. Known for their hosting of the Day and Nightlife Brunch and a wide variety of other musc; the HRB is no stranger to bass music pouring through their soundsystem. The show is on a Monday and we all know Monday’s suck; so cop some tickets and give yourself that carrot on a stick to get through the day. We’ll see you there.

Get your tickets here.

Now available for listening on Soundcloud is Tiesto’s remix of Ellie Goulding’s newest single ‘Burn’. With Ellie’s intoxicating vocals from the original song, it…