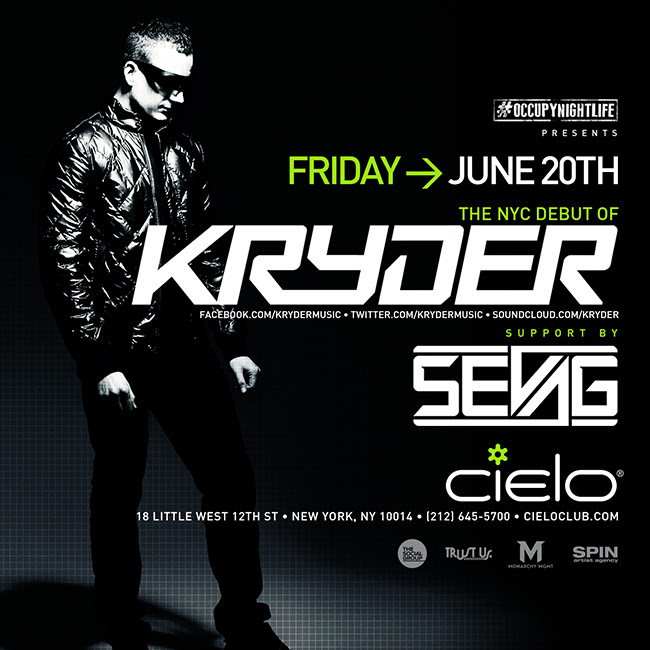 On Friday , June 20th the one and only Kryder will be headlining his first New York City event at the legendary Cielo Club. Our main dude Sevag will be supporting , and this will be one of those nights that will be talked about for weeks. Sevag was our recent guest interview and guest mix in which he talks about and shows his versatility as a producer/DJ.

Kryder literally came out of nowhere to become one of the most recognized names in dance music specializing in House, Trance, Electro and more in which you can’t even pin-point a genre for the talented producer. Heavy support from Swedish House Mafia, Pete Tong, Calvin Harris, Laidback Luke, Eddie Halliwell, Zane Lowe, Erick Morillo, Capital Radio’s Andi Durrant and Judge Jules to name but a few have upped his status as one of the leaders of the scene.

If you follow EO, you already know about Sevag. Coming off spinning for Thomas Gold’s ‘FanFare 100’, and ripping Atlantic City, you are in for a treat. He puts hours in the studio, and is extremely passionate about what he puts out, which really seems to be lost in today’s big-room tracks. We are looking forward to seeing the two head Cielo club and can’t wait to see you there!

The first round of tickets were sold out quickly, but some are still available here.

Starscape 2012: What You Need to Know