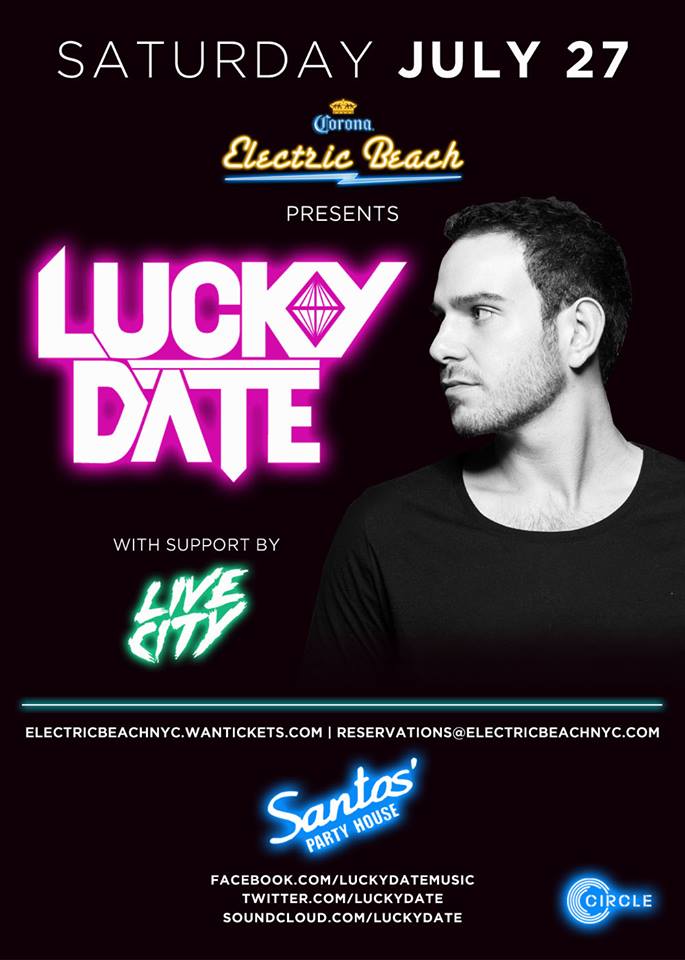 If you consider yourself to be one of the more die-hard electronic music fans, or a “head”, then you probably already know that this Saturday, Lucky Date will be headlining Santos Party House, with support from Live City. If you’re more of a “noob”, continue reading and we’ll explain why you want to be there.

Jordan Atkins-Loria, also known as Lucky Date, will be headlining the event. Born and raised in Oakland, California, Jordan first began seeing success as a producer in 2010 when Spencer & Hill asked him to remix their track “Dub Disco.” Around this time, he was also showing promise as an engineer, selling preset sounds for many artists, including David Guetta. Now-a-days, Lucky Date uses his producing abilities to create hard electro, often manipulating screeching bleeps, and grungy bass lines into energetic compositions. He recently released the sixth volume of his “Who’s Lucky” podcast, which displays his DJing abilities, and serves as a good preview to this Saturday. He also showed his remixing talents with his take on Hardwell’s “Apollo”, and his creative ability in original tracks like “Fantom.”

Live City will be providing the support, but don’t think for a minute that just because they’re not the headliners, they won’t put on a headliner quality set. If you’re an avid reader of ours, then you know all about their recent collaborations with Tommie Sunshine. What you may not know is that they are excellent DJs as well. They have impeccable track selection, and their chemistry shows in their ability to flawlessly transition from one to the other. Personally we can’t wait to hear their remixes of “Safe and Sound” and “Hey Now” live.

Santos is called a “party house” for reason. Come find out why this Saturday with help from local talent thats about to blow, and one of the most talented producers in the game. Get your advanced tickets here, for only $20.

Talk about a throwback. I remember seeing a quick snippet of this exact remix last year but no details ensued. Premiere French house producer,…