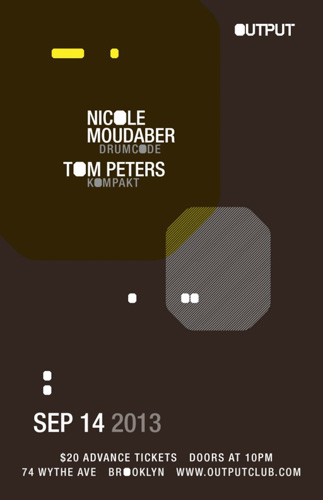 Made Event’s cancellation of Electric Zoo’s Sunday festivities also meant the cancellation of the dedicated Drumcode stage at Sunday School Grove. The stage had been a strong techno presence in a festival filled with various genres and fans, with Laurent Garnier and Danny Tenaglia playing standout tech house sets that kept the crowds moving. We were all eagerly awaiting Sunday’s performances by the likes of Adam Beyer, Nicole Moudaber, and other talented DJs from the Drumcode label.

After the news of cancellation spread, Adam Beyer vowed he would bring a Drumcode experience back to New York and he has certainly delivered on his promise. This Saturday, Nicole Moudaber finally brings her sexy production style and unique persona to Output in Brooklyn. Output is known for its tech house influence on the scene in New York, and while the club mostly features underground artists in the spotlight, they also bring in top DJs to play sets for fans who truly care about the music. The last time Nicole was in New York, she effectively destroyed Cielo at the release party for her first album, ‘Believe.’ We suggest you don’t miss this show, as it’s sure to be talked about well after Saturday night. Advanced tickets are $20 and selling fast, and we suggest buying them to avoid a higher cover and your entry to a crazy night of chaotic beats and aggressive drums.

Alesso Vs. OneRepublic – If I Lose Myself (Alesso Remix)

It is safe to say Alesso is not a rising star anymore. He is a star. Recently coming off a set at the main…