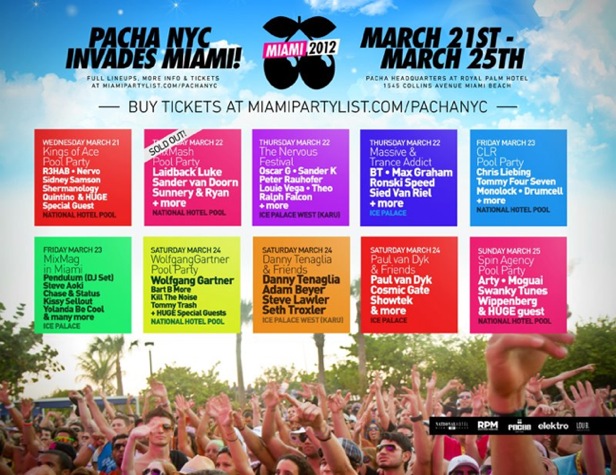 Ready, set, go! The beloved Pacha NYC, purveyor of some of the finest electronic music events in this fair city, is bringing its magic to Miami for the biggest North American gathering of the industry and fans next week. As if that weren’t enough, as a countdown to Miami, EO is teaming up with Pacha to give one winner a day a spot to a pool party, plus a guest! So stay tuned here each day for your very own chance to be a part of the incessant madness. NYC in Miami represent!

Kick off the party Wednesday, March 21 at the Kings of Ace Pool Party, co-sponsored by the Dutch Ace Agency, at the National Hotel (1677 Collins Avenue). An all-star lineup of lowlanders will start the week right, namely R3hab, Sidney Samson, Bassjackers and Aussie twins Nervo. Get tickets HERE.

Get back in shape by taking off Thursday in anticipation for the CLR Pool Party Friday, March 23, also at the National Hotel, for a dose of serious techno from Chris Liebling. As WMC doesn’t boast many straight up techno events, tech heads be sure to make your presence known at this party. Grab your tickets HERE!

Also that Friday is the ‘Mixmag in Miami’ party at Ice Palace, where Australian bassmeisters Pendulum will be throwing up a DJ set, along with Steve Aoki and a slew of yet to be announced super-guests. Don’t wear anything that you prize, as it will inevitably be covered in cake, champagne and the stench of happiness. Don’t hesitate and buy your tix HERE.

Pacha is bringing out the heavy hitters Saturday, March 24 as Wolfgang Gartner brings a whole bunch of his closest friends to the National Hotel. Bart B More, Tommy Trash, Felix Cartal and Pierce Fulton will provide brotherly support to Mr. Gartner for a technically synth-heavy afternoon. Pick up your tix HERE.

House music legend Danny Tenaglia on Saturday March 24 will present ‘The Return of the Marathon’ and bring everyone back to the great traditions of the genre. Tenaglia will bring along Adam Beyer and Steve Lawler for this journey back into house music past, through the present and into the future. Prepare yourself by buying tickets HERE.

Wind down Sunday, March 25 with the Spin Artist Agency Showcase at the National Hotel. Young Arty, Russian production artists Swanky Tunes, Swedish duo Rebecca & Fiona and Danish god Morten Breum will gather to bring guests through to the last moment of electro pleasure in Miami. A special guest is set to be announced and as Pacha put it “letâ€™s just say weâ€™re going to end this week the same way we started it.” Get your hookup HERE.

Sunnery James & Ryan Marciano are two of dance music’s most prosperous DJ duos in the game. The Dutchmen have concurred through the fade…