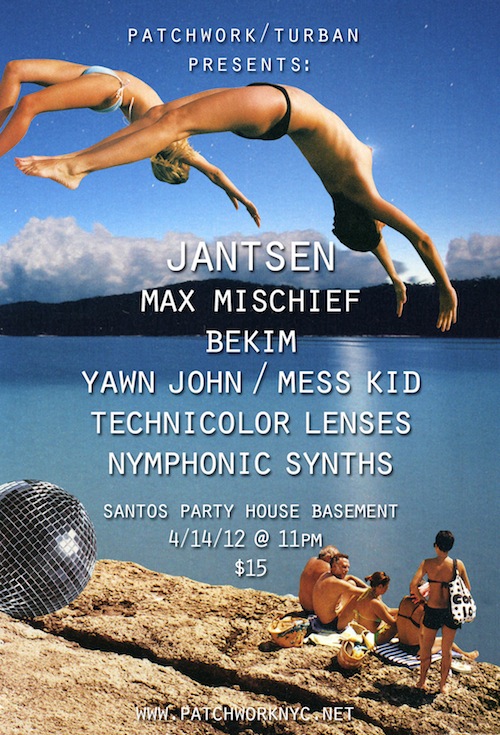 This Saturday, Patchwork and Turban (the guys who brought you the now infamous secret Skrillex show back in February) are teaming up to bring you an epic night headlined by Colorado-based DJ and producer Jansten. Jansten is an incredibly strong presence in the EDM scene because of his unique sounds influenced by a variety of genres such as jazz, blues, funk, hip hop, and more. He has collaborated with some big names like Propatingz, and most recently with Bassnectar on his track ‘What (feat. Jansten)‘ on ‘VAVA VOOM‘.

Rounding out the bill are Patchwork’s own Bekim, as well as Max Mischief (of the Bass Fueled Mischief fam), Yawn John, NYC-native Mess Kid (who’s been playing NYC parties for YEARS… not to mention his work was just featured in a Barney’s New York commercial), livetronica extraordinaires Technicolor Lenses, and Nymphonicsynths.

The party’s going down at Santos Party House (meaning it’s 21+ of course) and doors are at 11pm! (Get there before midnight and pay $10 instead of $15.) You won’t want to miss out on this one folks!

There are no fitting words to describe last night’s show. But we will try. Arty put on a spectacular performance at Pacha, coming straight…