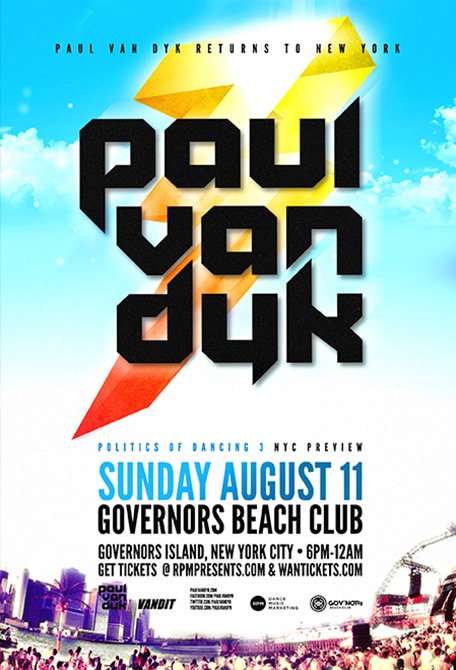 The Summer of Gov’s continues and next on the bill for Sunday, August 11th is Trance legend, Paul Van Dyk. Everyone privy to Trance knows that PVD is not an act to miss. At his shows, in addition to DJing, PVD incorporates live keyboard into his sets, which adds an artistic melodic twist to the experience. His prodigy, Giuseppe Ottaviani, follows in his footsteps and also performs live keyboards, recognizing the value of this integration.

PVD’s most recent studio album, Evolution, has seen great success amongst the Trance community. It was released in 2012 and features collaborations with names such as Arty, Kyau & Albert and Giuseppe. Following its release, many Trance producers released their remixes of the album’s tracks and, in February 2013, a remixed version of Evolution was released titled (R)Evolution: The Remixes, which showcases a plethora of Trance names including Alex M.O.R.P.H., John O’Callahagn and, of course, Giuseppe.

(R)Evolution is just as satiating as the original album, each remix elaborating on the beautiful foundations of Paul Van Dyk’s tracks. John O’Callahagn’s remix of “I Don’t Deserve You” creeps us up towards that 140, while still harboring the angelic, soft chorus of the romantic song that will keep you stomping. Expect to hear selections from Evolution and (R)Evolution next Sunday at Governor’s Beach Club.

As the event flyer reveals, PVD’s Governor’s Island show will function as a preview for his latest project The Politics of Dancing 3. In 2005, PVD released The Politics of Dancing 2, a trance album compilation which peaked at #5 on the US Dance/Electronic Albums chart and featured PVD’s single “The Other Side.” Trance fans all over the world eagerly anticipate the release of the third album in The Politics of Dancing series, and Trance Family NYC will be blessed with a preview next Sunday, August 11th as Paul Van Dyk takes the decks, spinning New York City into a higher state.

Tickets are are still available for purchase! Hope to see you there.

The members of Swedish House Mafia, both collectively and separately, have made it their signature style to create a large splash with all of…