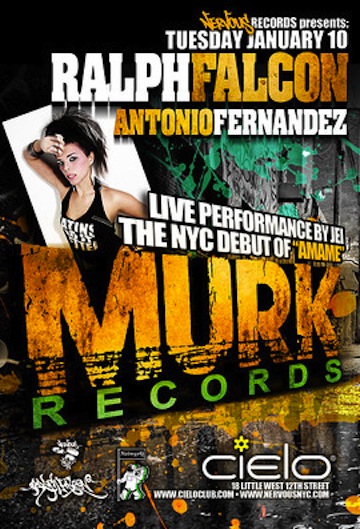 On Tuesday January 10th Nervous Records starts off the New Year by bringing Murkâ€™s Ralph Falcon to Cielo. Not only will Ralph be playing all the tracks from his extensive catalog but heâ€™s also bringing along his friend singer Jane Jei for a special live performance and NYC debut of the current Murk/Intruder smash, ‘Amame’.Â The show is 21+ and runs from 10pm to 4am. Open bar 10-11.

‘Amame’ is a Murk production from Oscar G and Ralph Falcon under the guise of Intruder â€“ a guise this duo has not used since 1992. Effortlessly straddling the often tricky to navigate border between house and techno, it features one of the most hypnotically memorable vocals of the year courtesy of Jei. ‘Amame’ was the Essential New Tune on Pete Tongâ€™s last BBC Radio 1 show of 2011.

Dimitri Vegas & Like Mike‘s radio show Smash The House on French DJ Radio FG featured Dutchmen R3hab, who has really been on the…