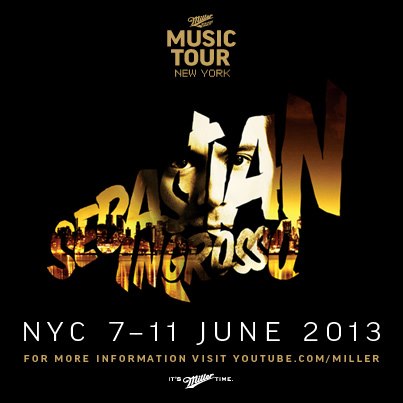 Three words: Swedish, House, Mafia. Now we’ve got your attention. Well in just two weeks, on June 10th, one third of the three-headed, supergroup will be making a very special performance at Highline Ballroom. Not much information has been released regarding ticket sales, and there still hasn’t been an official press release, but what we do know is in mid-April Miller Genuine Draft announced it is teaming up with Ingrosso to give an exclusive show to 700 lucky fans. It is supposedly free, and in order to win tickets fans from all around the would have to pay close attention to his Facebook page. Fast forward a month and half later, and still not much information has surfaced.

We’ll say this, considering how busy Ingrosso has been in recent months, it must be hard for him to plan/schedule a free show. Just recently he and Axwell announced they have been producing music for the new Monsters University movie, as well as the concept for their new weekly party at Ushuaia Ibiza, Departures. He also recently released his huge track with Tommy Trash and John Martin, Reload, all the while sights of Swedish House Mafia’s One Last Tour are still in his rearview.

Though, like we said before, not much has been announced about this “secret show” of sorts, but as more information comes about, we’ll keep you posted.

Finally, the track we have been waiting for all of festival season has finally been released. Played throughout the many months we like to…