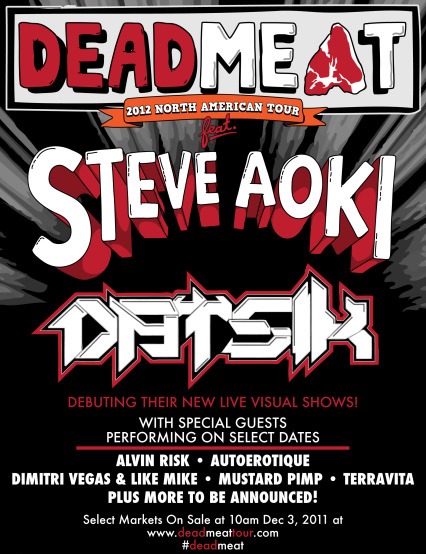 Dim Mak founder and heavyweight Steve Aoki announced his 2012 DEADMEAT tour dates, with the support of dubstep producer Datsik. The two will both be releasing debut albums in the new year: Aoki’s WONDERLAND is due out January 17 and Datsikâ€™s album drops in April.

Aoki destroyed Roseland back in April, and his upcoming show at Roseland February 17 promises to be even more mind blowing, as the tour is showcasing new live visual productions from both Aoki and Datsik. The duo will also grace the tri-state area with shows at the Borgata in Atlantic City on Feb. 18 and Starland Ballroom in Sayreville, NJ on Feb. 19.

Tickets for the DEADMEAT Tour will go on sale starting Saturday, December 3 at 10 a.m. at www.deadmeattour.com. Also check the website for the full list of tour dates.

Check out a video installment from his summer tour:

Last September, the Swedish House Mafia took over Pete Tong’s duties at his Essential Selection show and put on, as expected, a memorable performance….