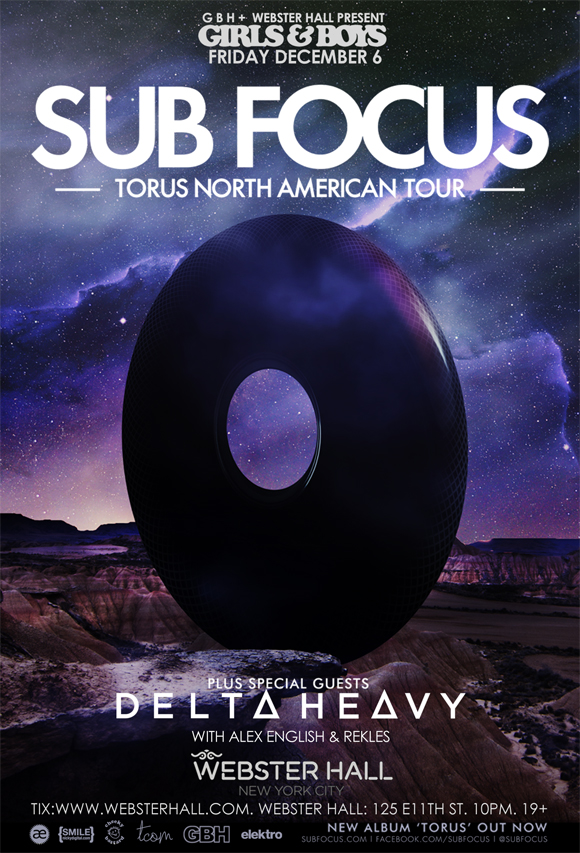 Sub Focus is finally back in New York after his rare Electric Zoo performance was canceled due to the tragedies that occurred on Day 2 of the summer festival. He released his long awaited second album ‘Torus’ this year and received outstanding reviews. On December 6th he’ll be taking over the Grand Ballroom at Webster Hall with some help from Delta Heavy. Delta Heavy is currently on tour with Sub Focus as his only support on the North American tour. The London duo saw big success this year and even played for a massive crowd at the Hilltop Area at Electric Zoo. The boys describe their sound as ‘anything between 110 and 174 BPM’.

Since the release of his first single off ‘Torus’ fans have been salivating waiting to see what Sub Focus had cooked up in his absence from the studio. His first single ‘Falling Down’ was a huge hit despite criticism for being a departure from his drum & bass roots. Sub Focus silenced the critics with his release of ‘Out the Blue’ which bounced around tons of sets at Ultra 2011. ‘Out the Blue’ also received huge remixes Laidback Luke and xxxy. ‘Tidal Wave’ followed ‘Out the Blue’ and became his biggest hit to date with constant plays on BPM and Electric Area. Sub Focus also received a huge cosign from Skrillex during his BBC Radio 1 Essential Mix when he played Flosstradamus’ remix to ‘Tidal Wave’. The tail end of 2013 was absolutely huge for Sub Focus and his US fans have been waiting to see what all the fuss is about.