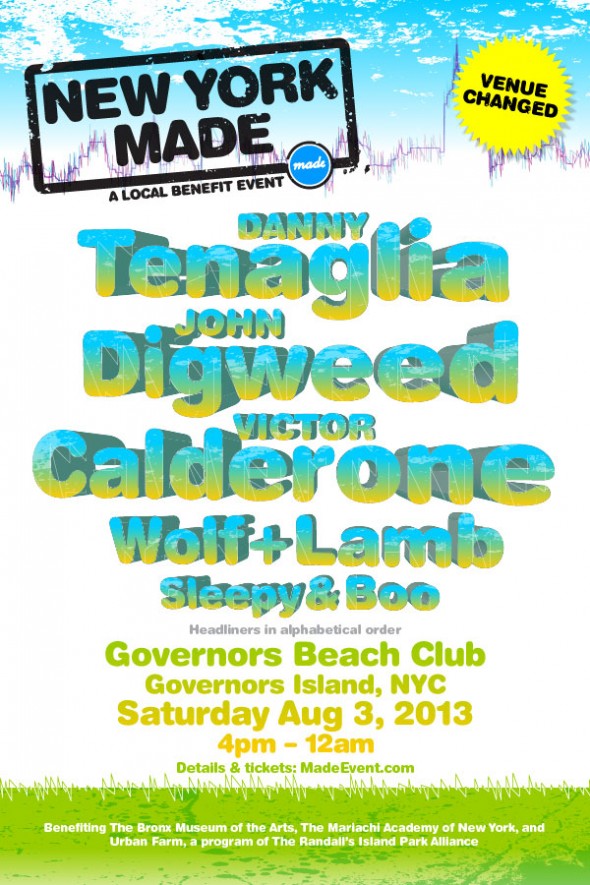 If you’re a fan of tech, house music and dirty-dark beats, then we are expecting to see you at Governors Beach Club next Saturday night. Why? Because Made Event is putting on one of the best non-festival, single day lineups we’ve heard for this scene. Sleepy & Boo, Wolf + Lamb, Victor Calderone, John Digweed and Danny Tenaglia will all be taking turns laying down tracks as Made takes over Governors Island for the last event they put on before Electric Zoo 5.

As we’re sure you’re well aware, Governors Island has put on a number of shows this year that has made the beach club the premier New York City summer venue. The combination of the great views, the sand between your toes and warm weather make it impossible for other locations to compete with it. Over the past two years or so, the number of concerts that have taken place there has steadily increased each summer, but no show will have an impact quite like what is going to take place August 3rd. The day starts with Sleepy & Boo controlling the decks for an hour, from 4pm-5pm. Next, Wolf + Lamb will get a turn, spinning from 5pm-6:30pm. After Wolf + Lamb is when things will get turned up a notch. From 6:30pm-8:10pm Victor Calderone will DJ by himself. Then, John Digweed will join him onstage for a 15 minute back-to-back transition. From 8:25pm-10:05pm Digweed will control the tunes, who will then be joined by Danny Tenaglia for another 15 minute, back-to-back transition set. New York legend Danny Tenaglia will then close the night, DJing by himself from 10:20pm-midnight. Still doesn’t sound that special you say? Well how about this: all the proceeds will be donated to three local New York City charities. The Bronx Museum of the Arts, The Mariachi Academy of New York and Urban Farm(A program of The Randall’s Island Park Alliance).

The freaks are going to come out next Saturday night, it’s a given. If this is your scene get your tickets now, because this show will sell out. Even if this sound isn’t your particular brand of vodka, we always recommend trying something new, and suggest you let the New York titans of tech open your ears.