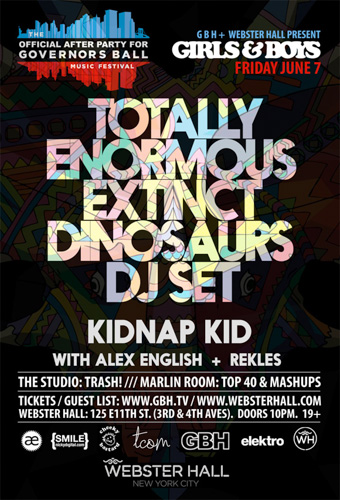 Totally Enormous Extinct Dinosaurs (or TEED for short) is the stage name of Orlando Higgenbottom, an English producer of indie electronica that is refreshingly new and catchy. Taking musical cues from acts like Digitalism and Phoenix, he fuzes hazy vocals with crisp percussion and dub-laden sounds to create music that is as suitable for the dance floor as it is for a backyard party.

You can find the talented TEED at Webster Hall this Friday performing a DJ set as part of the official after party for Governor’s Ball. Check out his SoundCloud to sample some of his tracks.