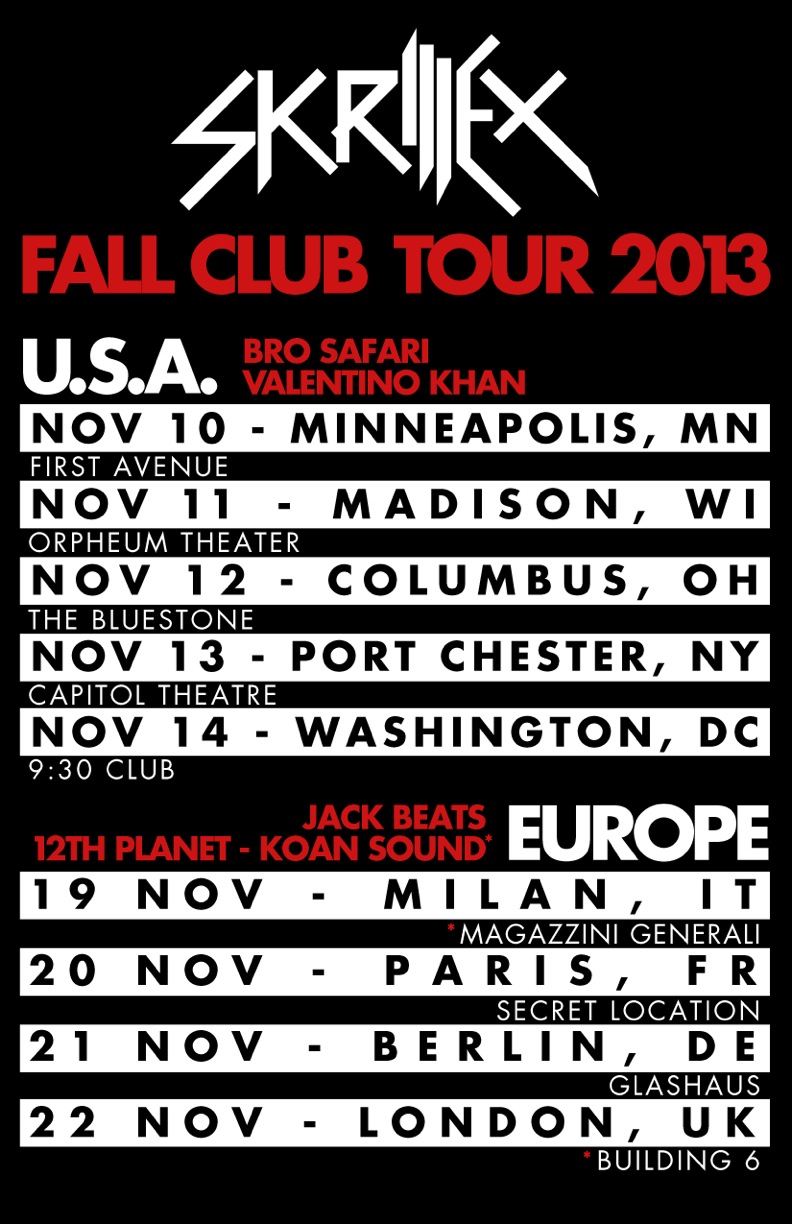 After dominating 2013 with his ‘300% acid break house’ side project Skrillex is back on tour. Sonny just kicked off his Fall Club Tour and he’s now playing without the help of his group member Boys Noize. Boys Noize and Skrillex changed a lot of minds with their ‘Dog Blood’ side project with their unorthodox sound. The American Dubstep trailblazer gave critics something to really talk about with his new music selection. His now legendary 2013 BBC Radio 1 Essential Mix brought us some of the freshest house and techno tracks and showed Sonny’s range.

The 2013 Fall Club Tour will be stopping in 5 cities in the US and 4 in Europe. The US shows will feature support from Bro Safari and Valentino Khan. Valentino Khan has been having a very successful year; he’s opened for The Bloody Beetroots and now for Skrillex. Bro Safari has been busy touring all summer and will bring his huge Trap and Moombah sound to the sold out tour. The European leg of the tour features OWSLA label mates Jack Beats, Koan Sound, and 12th Planet.

Skrillex is poised to have his biggest year since his 2011 release of ‘Bangarang’. He’s taken somewhat of a hiatus from his traditional Skrillex sound while on tour with Boys Noize, and is in position to make a huge comeback. Expect all the classics from Sonny like ‘Scary Monsters & Nice Sprites’ and ‘First Of The Year’ but be ready for some new tracks off his upcoming 2014 album. His longtime friend 12th Planet tweeted about how massive it’s going to be. This is Skrillex’s first time back in New York for a solo set since his surprise visit during Alvin Risk’s performance at Webster Hall. This is definitely one you can’t miss and we’re sure Sonny has a few surprises up his sleeve for the intimate club tour.

Just listened to @skrillex new album for 2013-2014 and all I have to say is how incredible / next level it is! #werenotworthy